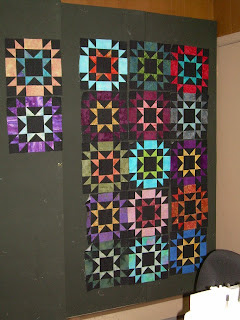 Well, after my rant of the morning -- which really started when I read about the plenary indulgences, long before I learned of Her Release -- I needed something to make me feel better this afternoon. A kind of a tonic, I think. But without the gin. I'm loving being on "summer hours" where I leave work at 2:00 in the afternoon instead of 4:00, after having started work at 9:00 instead of 8:00. It is great to have these chunks of time at the start of the day and again before dinner.
. . . .
I've been using the later chunks for sewing. A couple of days ago I put a set of blocks up on the design wall. I belong to a couple of on-line quilting groups, and both of them have a project going where one month per year I get to send out a fabric of my choice with a request for a particular type/size of block. My blocks from the BDR group yielded the quilt for Allison. The blocks to the left represent the harvest from the FQ group. Sent out a terrific black-on-black fabric and requested that the group make me 12" Amish Star blocks, using two relatively tame batiks. The blocks that came in are stunning. As you can see, I pretty much need three more. So this afternoon's Tonic No. One was going into my batik bin and choosing the components for those blocks, cutting the pieces, and starting to sew them together.
. . . . 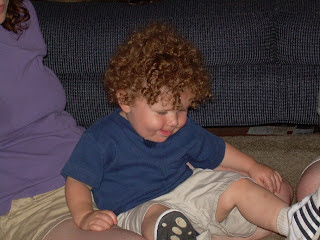 Tonic No. Two, of course, would be Sam. Being with him or even looking at a picture of him is enough to lift my mood, my spirits, on even the grumpiest of days.
. . . .
This picture was taken at his house a few weeks ago when Sherry and Chris invited us to have dinner with them and then attend a program at Sam's day care center. This pic is from after dinner, when he's cleaned up and ready to go.
. . . .
And, yes, the curls are as much fun to touch as one would expect!
Email Post