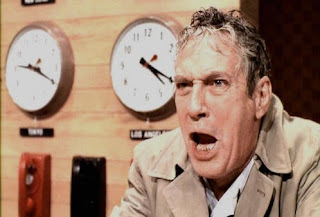 What the heck is wrong with our country that this the main story on CNN today?

. . . .
Britney, Paris, Nicole, Lindsay . . . . I'm so tired of their drinking, their drugging, their shaving, their pantilessness for crying out loud. Even after her death we are still infected by the ever useless Anna Nicole. Are there actually people who are interested in this tawdriness that passes for lives?
. . . .
And the bigger, more important question: Why has the media prostituted itself for the likes of them?
. . . .
I stopped watching network news on the big three with the fall of Dan Rather, still grieving the retirement of Walter Cronkite. I discovered Aaron Brown on CNN and admired his taste, his demeanor, his credibility, his thoughtful, quiet commentary. Gave up on CNN news when he was replaced by Anderson Cooper (is there anyone who doesn't recall his desperate clinging to a street sign during Hurricaine Katrina when anyone with a shred of sanity would be reporting from inside?) who reminds me of nothing more that Kermit The Frog in hysterical reporter mode. Wolf Blitzer (and just what was his mother thinking when she named him? Does he have siblings named "Moose," "Coyote," "Tortoise"?) isn't significantly more tolerable.
. . . .
In a way, I guess, I'm thankful that Chet Huntley isn't around to witness any of it.
. . . .
Last night, after the TV tripe I was sewing in front of was over, I caught a glimpse of the local news with the obligatory weekly shot of a microphone stuffed in the face of a grieving mother after yet another random shooting, and I remembered why I stopped watching the local hacks as well as the national ones.
. . . .
So the default news sources for me are my morning paper -- which this very morning incensed my Lutheran soul by proclaiming that the Philadelphia Archdiocese has reinstituted the offering of plenary indulgences, thus jeopardizing any progress made in the thirty years of Lutheran-Catholic dialogue (but that isn't the fault of the Philadelphia Inquirer and the story was well-researched and well-written with quotes from credible authorities for a change) -- and an as-needed glimpse at the CNN website. Where I discovered the aforementioned lead story.
. . . .
As Bogie said, "We'll always have Paris." But do we have to have so damned much of her?
Email Post
Labels: Rants

Greyhair said…
I feel your pain.

Other than the Lehrer NewsHour, which can be pretty wanky itself, I put the headphones on a play guitar during the network news hours and watch old movies the rest of the day. And if I'm having a low blood pressure day? A few minutes of CNN takes it right out of me.
Tuesday, June 26, 2007 12:58:00 PM

Chez said…
God bless you. "We'll always have Paris." That's ten times more clever than anything I've come up with so far.

You have every right to be angry; we've failed you. The people you once trusted to bring you important information in a clear and concise way have morphed into this hideous beast that basically rams crap down your throat in the name of ratings.

I will say this though, for the record: although I miss the hell out of Aaron Brown right about now (and there's no denying that his dismissal was the unfortunate turning point for CNN) -- he was actually an insufferable pomous ass in person.

LoieJ said…
I've been getting most of my news from the 'net. I can read the headlines, and then read the articles I want. No more spending an hour with the newspaper "just because it is there." I miss Aaron Brown too. He was good during the hype of war. I don't like their new morning anchors (yet) but since I turn to someone else, I probably won't get used to the new ones.

I wish there was more of a delineation between news and editorial on the stations, esp on CNN, which DOES seem to send people all over the world. So at least there is one good point.
Tuesday, June 26, 2007 2:30:00 PM

Ms. Jan said…
Jimmy Lehrer and his Greyness give my my news.

Thankfully, the San Francisco ABC affiliate doesn't give her too much time.

CONNIE W said…
Count me in with the group here...I can't take it anymore either. I gave up the morning "news" when they started going outdoors to show the screaming crowds with signs...I hate that part!...and when the program was too long to fill with true news so they talk about anything, anybody, and bore me to death. Bye-bye, Morning news. Evening news, well my DH watches it so I hear it whether or not I choose unless I leave the room. I do like to hear the local weather forecast. The BIG networks who do nothing but talk, talk, talk or should I say yell-argue-yell-argue-yell, don't want it, don't need it. Bye-bye, Evening news. I peek at the local paper to scan the the titles, rarely read; and don't bother with other newspapers. I do sometimes read what is on the homepage of my computer when I log on and pretty much hear it accurately and first there. It works for me. I'm SICK SICK SICK of these phony celebs and their non-interesting stories. But I suppose some people love it as that's all we hear about when we turn on the TV. And that's why I no longer watch. Sorry, I ranted...I'll step down from my soapbox now and give someone else their turn.
Tuesday, June 26, 2007 7:02:00 PM

slouchmonkey said…
I enjoy the Good Morning America every now and then, but they had that awful person Ann Coulter on the other day and I'm about puked. I haven't watched, since.
Tuesday, June 26, 2007 7:18:00 PM

atet said…
Add my name to the list of those disgusted with what passes for "news" and reporting these days. Does the news media and the corporate ad folks really think we are that dumb? Or have we Americans simply shown them again and again that we are willing to take it?
Wednesday, June 27, 2007 1:19:00 AM

Unknown said…
I agree totally - over here in the UK it's not much better - the 'celebrity culture' and the public's obsession of it has taken over the media - mind you it wasn't always up to much before. Like one of your other commenters I pick my news up from the net via the BBC website - I read what I'm interested in and shun the rest. In the UK we have a programme called 'I'm a celebrity, get me outta here' where nonentities who think they're something are banished to the australian outback, filmed and the public vote them out in stages - entire drivvel the lot of it - my retort is 'I'm not a celebrity, for God's sake get ME out of here!!!' Mind you don't solely blame the media - without customer demand they wouldn't be in business producing such tripe - who is ultimately to blame?
Wednesday, June 27, 2007 4:15:00 AM

Marla said…
I'm with you! I am so sick of the glorification of the negative! Drinking, drugs, ect. Beyond that, I get stressed by the constant barage of simply awful! Violence, death, destruction. Sometime I just need to retreat to the 4 walls of my own house and forget pretend none of it exists. Thanks for the blog.
Wednesday, June 27, 2007 9:21:00 AM

Susan said…
Hey, something we agree on! If I never hear another word about these stupid women who have more money than morals, it will be too soon. We DVR the CNN news for an hour and then speed through it for things that are interesting, usually taking less than 10 minutes from an entire hour. I do like to listen to Glenn Beck, though. He presents some really interesting people, though I know you'd hate his politics. =)

Tanya said…
I don't know about American news but Japanese news is pretty one sided. They get a lot of commentators who will all have the same opinion and get them to say the same thing in different ways. Not quite so much of the celebrity news as I suppose you get in the States, but enough so make the over 30 crowd tired of it.
Thursday, June 28, 2007 5:31:00 AM