One of Allison's Biggest Fans 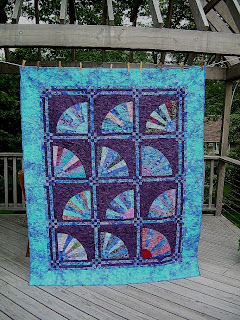 I started to get to know Allison a few months after her dad died. She was 10 or 11 at the time. I'd known who she was from the time she was a tiny little girl carrying a big stuffed dog into the front pew on the left each Sunday as she entered the church with her parents and her brother. But I didn't get to know her, really know and appreciate and love her until tragedy struck and her mom and I became close.

. . . .
It has been nearly three years now since her Dad's passing. And she's growing up so beautifully into someone he would be tremendously proud of. In the past year, as part of the Confirmation Class, she has assumed the responsibility of serving as acolyte about once each month, and she does it with grace and poise.
. . . .
As you can tell, I'm one of her Biggest Fans. And when I realized this past winter that her confirmation was coming up, I decided I needed to recognize this milestone. One of my online groups has a project where each month someone gets to send out fabric with a request for a specific kind of block. Everyone else in the group adds the kind of fabric that is requested, makes the block, and mails it home.
. . . . 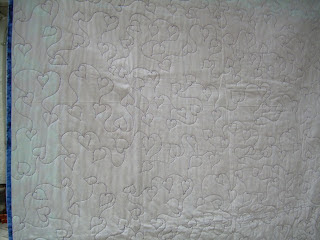 My month was February and I chose two batiks -- one a periwinkle and violet and aqua butterfly print, and the other a purple mottle -- and sent them out with the pattern for the fan block. I asked my partners to add batiks that went well with the butterfly print and the purple, to use the purple for the background, and to incorporate the butterfly into the blades or hub of the fan.
. . . .
Watching them come in that month was so much fun! I waited until all eleven had arrived before I made my own. My friends did such a nice job for me. And for Allison. When it was all finished, I sent it off to Branky and asked her what kind of quilting she thought it should have. I told her Allison's story and she replied, "I'm going to quilt hearts, because she is close to your heart."
Email Post
Labels: Friendship Quilts

Mrs. Goodneedle said…
Your heart has drawn so many close, and you are just as precious to them, too. What a kind and loving heart you have to give so much to so many! Allison is one lucky young lady to have you for her friend, the quilt is perfect.
Tuesday, June 19, 2007 9:48:00 PM

Anonymous said…
Yes, good quilt stories are so soothing to the soul. what a gorgeous grouping of fabrics you used.
Wednesday, June 20, 2007 12:37:00 PM