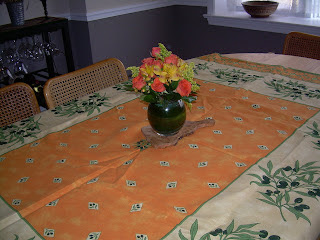 One of the families from the Quaker school where I'm employed opened a flower shop. This family is large, and several of their many children have gone though our school. The connection is close and longstanding.

One of the perks of my job includes receiving a small bouquet for my desk from the shop each Monday that school is in session. The arrangement is delivered in the afternoon, usually while I'm in a regularly scheduled meeting, and the container from the previous week's arrangement is picked up.

Sometimes the flowers do well enough that I can bring them home with me on Friday. Such was the case this week. I brought them home and thought about a tablecloth that Dottie had brought me from her trip to Italy. I believed the flowers were a perfect match. I was right.

And now, as they say, for something completely different. 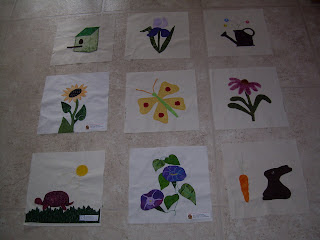 When Sherry was expecting Sam, his in utero name was "Muffin," partly a play on the "bun in the oven" concept (you should pardon the pun) and partly out of a hilarious family conversation about one of the other grandmother's students who had actually been named Muffin. I had a garden-themed quilt top that Sherry had long admired and when she painted the room pale green, I had it quilted and we hung it on the wall adjacent to the crib.

For our MLK Day of Service, Joe and I spent much of the day out at Chris and Sherry's, helping them get some projects completed and moving Sam out of his baby room and into what had been the guest room. Chris brought his garden quilt along and hung it on the wall above his big-boy bed (more about which in a future post). The crib has been put away for now, and the baby room is a storage area for some of the projects-in-progress.

The new baby is due in about five weeks. This person's code name is Biscuit and I, for one, can't wait to meet her or him. Actually, Sherry's pretty eager to make that acquaintance at this point too! This morning I went through the blocks from a garden swap of a couple of years ago and picked out the ingredients for a new garden-theme wall quilt for Biscuit. What fun I'll have getting this one finished. Five weeks 'til the timer rings!
Email Post

CONNIE W said…
What an enjoyable post. I totally love that tablecloth! Would go with my dishes and my kitchen theme!
Saturday, January 26, 2008 6:59:00 PM

*karendianne. said…
First - I really like the "MLK Day of Service" ~ very cool!!!

Muffin then Biscuit - too cute! The table looks so pretty and boy I love these blocks. Something to keep you busy while we wait patiently because we're all patient!
Monday, January 28, 2008 3:08:00 PM