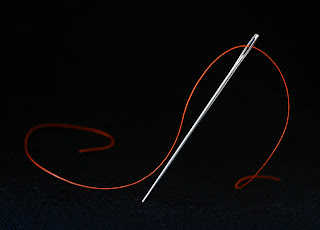 It was dear Juliann who provided the link that set me to thinking today. After I read what sharonb had to say in her second post on Slow Cloth, I went back and read the first one (scroll down about two-thirds of the post). Earlier in the day I had re-noticed the subtitle on Tanya's blog (go ahead, take a look -- she quotes the often-but-not-this-time dour Ecclesiastes). It all took me back to a time I hadn't thought about in quite a while.


I had finished my first year at seminary and during final exam week, my mother's husband had died. A week later I began CPE at a large inner city teaching hospital. CPE, Clinical Pastoral Education, is a requirement of almost all seminaries. The student spends the entire summer with a diverse group of other seminary students, providing pastoral care to an institutional population, learning from each other and from the experience of ministry itself. It is grueling.

My hospital was a Level I Trauma Center and also a Regional Spinal Cord Center. I spent every sixth night and every sixth weekend day and night at the hospital, the only chaplain in the 900-bed institution. The number of deaths was shocking and horrifying, but even more so the senseless violence of drive-by shootings that left random victims paralyzed for life. I baptized hours-old babies who would not live through the night, I called families to ask them to come in because their son/daughter had been in an accident. I witnessed a death-bed wedding one night and prayed with the widow the next morning. I finished my CPE unit late in August, with perhaps one week remaining of summer before my seminary middler year was to begin.

I was exhausted. I so needed that week to spend enjoying time with my children, two of whom in the next few months would be applying to colleges. I wanted to read, to play, to sew, to hang out.

It was not to be. The day after CPE ended, my mother's care-provider drew my attention to a lump in her neck, and much of the week was spent at medical offices. The Alzheimer disease was now compounded with a likely-fast-moving cancer.

September brought a month of learning Hebrew, 40+ hours per week. I got through it in some strange blur, though not without some tears. In the few days off from school before the semester would begin, I contacted a therapist, realizing that there were still "issues" about my mother and our relationship that needed addressing, and there wasn't much time.

Two weeks into the new semester, I had some sort of a melt down. I couldn't concentrate on my classes, I was suddenly panicky rather than proud about Tom's and Sherry's college searches, and the therapy involved revisiting extraordinarily painful times that I had thought were over for ever. Back in my blur, one morning I bumped into one of my professors from the previous year. All he said was, "How are you?" and I knew I was not good at all. He invited me in to talk, and he listened. I spoke about how overwhelmed I was, how my four classes weren't making sense, I was afraid of being unable to do my work, I didn't want to fall behind. He listened some more. And then there was a silence. Finally, he said, "What do you want to do?"

I don't know where the answer came from. I was a new quilter who had only a handful of completed projects in her portfolio, and no time whatsoever to explore any new ones. "I want to make a quilt for my daughter," I said, without thinking. In retrospect, I suppose he was referring to whether I should stumble along, reduce my courseload, or drop out of seminary. But as I said the words, I knew they were a deep truth, and somehow the way out of the blur.

Another silence. "Then do it," he said. "And do it with intentionality." We talked a little further and agreed that I'd also drop two of my courses, keep the ones I enjoyed the most, work hard at the therapy, and not worry about graduating on time.

Sherry and I went that very night to the shop to choose her fabrics, and I started cutting and piecing the next day. The top came together with few problems, and I spent the rest of the semester hand-quilting it. During semester exams, I made an appointment to show it to my professor.

Tanya said…
What a wonderful phrase. I will try to remember it and do the things I do with intentionality. Your professor was very wise to realize you needed to talk and then to ask you the question that set you thinking about your priorities. So many people (and so many pastors) get completely overloaded so that they can hardly help themselves let alone all the people that need them. Even though you have a chain of hard times it is nice to know that quilting helped you out of them. Stitching really is good for pondering and praying isn't it.
Tuesday, January 15, 2008 7:48:00 AM

Mrs. Goodneedle said…
Intentionality. What a great word. Well written, Nancy; this was the post I needed to read today. How did I miss it earlier?
Wednesday, January 23, 2008 9:20:00 AM