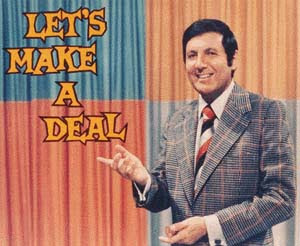 I remember when I was a child and had to stay home from school because I was sick, I often was permitted to lie on the sofa under a blanket and watch television. A show that fascinated me was Let's Make A Deal. It might still be on, for all I know. I just remember that peculiarly dressed contestants would show up at the studio with something to trade, and were ridiculously excited when selected to deal. They would trade a hard-boiled egg, for example, for a mysterious box. My favorite line was, "OR you can have what is behind the curtain Carol is now pointing to!" Oh, the indecision!

Blogger/readers, let's make a deal! After I reorganized my UFO/WISPs list, I thought about some of the things I have and evaluated the likelihood of their ever getting used or finished. I thought I would put them out there and see what someone might be willing to trade for them. Whaddya think? 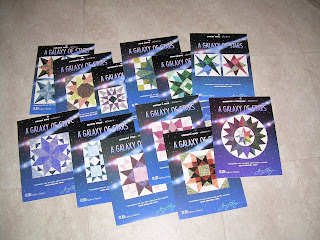 These patterns are all about stars; in fact, they are called "Galaxy of Stars." They are nice enough patterns, and I know I'm not ever going to do anything with them. There are twelve of them, and they are all very clear. Does someone out there want them? What would you be willing to trade for them? Items of possible interest to me include: shirting scraps of decent sizes or Fat 8ths that I could work into my jewel box quilt in progress; batik scraps or Fat 8ths; cream background scraps or Fat 8ths. Or perhaps you have something else you would like to trade for these patterns. They are new, never used, not marked up in any way. Wanna make a deal? 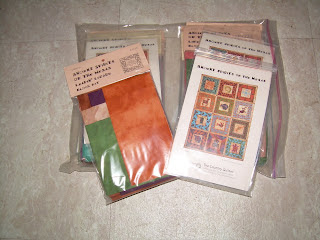 This is a set of BOM packets. There are twelve and each one contains the pattern and all fabrics (batiks/marbles) for the block. The series is called "Ancient Spirits of the Mesas." One has been opened and carefully reclosed. They sold for $10.95 plus shipping per packet when I bought them. Presently they are selling for $16.95 plus shipping shipping. My set does not include fabric for lattice, border, backing, binding, just the twelve blocks. You can check the quilt out here. And here's an even better picture. I bought these many, many years ago when I was a fairly new quilter and the whole BOM idea was brand new to me. Is this project more to your taste than mine? What might you want to trade for this set of block patterns and fabrics?

This might work out, or it might not. Could be that no one out there is interested in these goodies or it could be that what someone might offer to trade isn't something I can use. But it is certainly worth a try. Just, please, nobody offer me "what's behind the curtain Carol is now pointing to!"
Email Post

QuiltingFitzy said…
Oh Nancy! THIS Nancy wants to deal for the Mesa's project. I need to check my batiks, I don't have shirtings per se, but I do have homespuns which I'd be willing to offer. Let me know.
Thursday, January 03, 2008 9:44:00 PM

The Calico Cat said…
Let's make a deal was on as a marathon on the Game Show Network on New Year's Day. I kept switching back to catch glimpses (I did not get to see near enough ZONKS) but the owrst jobs in history was also on & that is what took me away from quilting on that sew day.
Friday, January 04, 2008 7:10:00 AM

Quilting Pirate said…
I'm going through my UFO's and came up with several to remove as well. It's so hard sometimes to let things go. Good luck finding new homes for your UFOs
Friday, January 04, 2008 8:34:00 AM

floribunda said…
Nancy, what a great idea! I like both of your sets, but no! no! no! Too many other UFOs and new projects I want to work on... but you've inspired me to to rummage around and see what I can offer up as my own trades!
Friday, January 04, 2008 2:14:00 PM

I would like to make a deal on the Star blocks. I have batiks galore so tell me what you need. I don't have any shirtings. Email me quiltingtraci@aol.com.