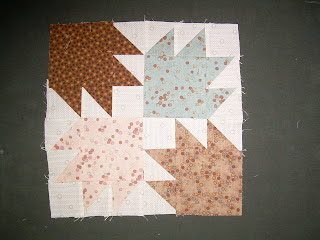 Each year, it seems, someone in our monthly block group chooses a Bear Tracks block for us to make. Last year I think there were two of us -- I was one (yes, one of my infamous WISPs) and I sent a nice black-on-black background and asked my group mates to use four different batiks. The results were stunning. Getting that set of blocks into a flimsy is a goal for 2008.
Chizuru is the first blockie for the new year, and I wasn't a bit surprised when she chose Bear Tracks. We're all getting kind of good at making them by now! Chizuru sent the background fabric and the darkest one, and asked us to add three different fabrics for the remaining pawprints. I had fun digging through my daiwabo taupes to find the right things. This goes off in the mail on Monday! First completed block of the new year! 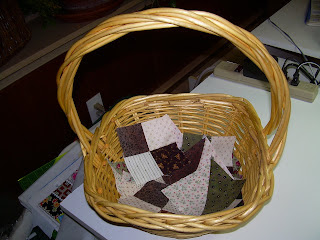 For ages, I've wanted to do a leader-ender project. You know, the kind of quilt that kind of makes itself? Where you do a fair amount of cutting of components and then use the cut pieces as leader-enders when you are piecing blocks for another project. If you stay at it long enough, the cut pieces turn into a top!
My problem was that I didn't know what kind of a project I wanted out of my leader-ender endeavor. Then early in the summer I saw the Jewel Box quilt at the LQS and was utterly smitten! I put two and two together (figuratively and literally) and decided that my leader-ender project would be a Jewel Box! I dug around in my scrap and FQ stash for the right colors and then grabbed a bunch of shirtings (I need more of those) and started cutting. In the basket you can see the HST and 4-patch blocks I've completed so far. 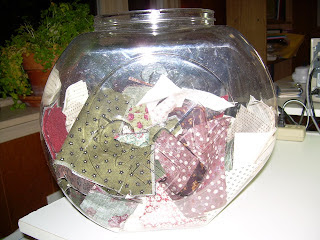 And this pretzel bin, compliments of my dear sister, is where I keep all my cut squares! As the one empties, the other fills!
At some point, I'll have miraculously and painlessly completed all the component blocks I need and then will begin leader-endering them into sixteen-unit blocks. I believe there are nine blocks in the LQS quilt. I don't know whether mine will be nine or sixteen. But I'm so delighted to have begun! Stay tuned.
Bo, who is totally recovered from his pancreatitis and back to his Bodacious self, came down and snooped around while I was sewing. I didn't have the camera handy, which is a pity, because he was acting mighty cute and I think some of my readers would like to see him back in his prime. Again, stay tuned.
Email Post

Tanya said…
Hi Nancy, How is Bo? I've been having computer problems and have had to relink to all my blogs so I got waylaid.

I am finally using some of my leaders/enders and yes it was a big help to have those squares cut out. I hope to find more projects to use with them since they keep multiplying! That jewel box is gorgeous!

Mrs. Goodneedle said…
This sounds interesting... like we're leading parallel lives. I, too, am sewing squares into 4-patches as leader-enders and putting them into a basket? Does Bo get yours out and carry them around? Turbo does!
Monday, January 07, 2008 7:23:00 AM

Karrin Hurd said…
I like the leaders,enders idea, and the pretzel bin.

You've been tagged by me for the "You Make My Day" Award. The rules are on my blog:)

*karendianne. said…
What a great idea for my group! I love what you came up with for the additional fabrics. I think you have some real goodies in your stash. ;)

That pretzel bin is a killer idea!!!!! Your sister is cool.

Leslie said…
Good to hear the update on Bo. I found this again and thought of you. http://www.nanceestar.com/CatPill.html