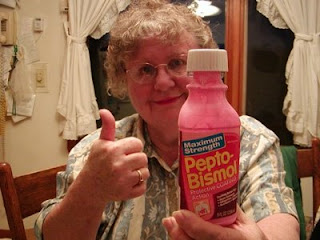 In the house where I grew up, there was a big bottle of Pepto Bismol in the medicine cabinet. It may have been the same bottle for twenty years.

It was a small family, a mother and a father and two daughters. When anyone got sick, someone else always offered Pepto Bismol. I never accepted. Neither did my sister. I have a vague recollection of offering it to my mother once when she was sick, and a vague recollection of her declining. Feeling sick was one thing: there was always the faint hope that the inevitable would not come to pass. Taking a dose of that pink stuff, I was certain, would hasten the cleansing process.

All of this by way of explaining my absence from blogland the past three days. We were at Sherry's on Saturday night and she casually mentioned that Caroline had thrown up earlier. Carrie was off her feed, but her usual cheerful, winsome self.

The sickness struck me on Sunday night, a few hours after my last post about my splendid weekend. I was very sick all night and all day Monday and well into Tuesday. I had hoped to return to work today, even got up and showered and dressed, and then crawled back into the bed. Tomorrow, as Scarlett would quickly point out, is another day.

Pati said…
I am one of those who swears by the Pepto. It has cured many stomach ailments between me, the kids, and occassionally the dog! One secret I learned though, is to keep it in the fridge. It is palatable if it is cold.

Helen said…
I've been a lurker on your blog for some time and I enjoy spending time reading your writings and oogling your quilts.

I'm so sorry you have been ill and am happy to hear you are feeling better. Like you, there was always Pepto in the linen closet when I was growing up. The one and only time I took it the cleansing came quickly. Never took it again!

Laurie said…
Sorry you've been sick! I hate stomach bugs worse than anything.

I agree totally about the pink LIQUID. The trick is to take the pink tablets, which do the same job, but taste like those pink wintergreen lozenge candies. (Do they even make those anymore?)

Word Verifacation "dograc": Goes on top of the car roof. The next step when puppy becomes jaded to the joy of sticking his head out of the window.
Thursday, February 05, 2009 12:33:00 PM

SallyB said…
Peppermint tea. Honest - it really works to settle a sick stomach. I swear by it. Even better, it's a natural remedy.

Also try Celestial Seasonings Tummy Mint tea - a combination of mint and chamomile that is excellent for settling an upset gut.

Try these and see if they work.

Word verification: Ingrin, an inward smirk at a smart remark, to be cleverly hidden from the viewer but known to the smirker.
Thursday, February 05, 2009 3:36:00 PM

Mrs. Goodneedle said…
So sorry to hear of the nature of your illness, yuck. I'm a ginger ale and crackers gal myself, or tea and toast; I don't do the pink stuff either. Feel better soon. I'd take your sister up on the jello.
Thursday, February 05, 2009 4:25:00 PM

Ms. Jan said…
Pepto--guaranteed to give me the heave-ho's. Blech. We went through a spate of that with Benjamin when he was almost a year old, so feel your pain. I'm glad you're on the mend and keep up the jello, skip the pepto.
xoxo
Thursday, February 05, 2009 7:09:00 PM

Cathi said…
That pink stuff is frightful!! Jello sounds like a much better idea. Hope you're feeling much better -- without the pink stuff!
Thursday, February 05, 2009 10:07:00 PM

StitchinByTheLake said…
Oh I so agree with you! No pink stuff in my house....the very thought of it makes me want to throw up! blessings, marlene
Thursday, February 05, 2009 11:11:00 PM

AnnieO said…
In my grandmother's house, it was a first aid ointment called "KIP" (I'm talking 1960s-70s era). Unless you were truly bleeding, more than just a little, she always said, "Just put some KIP on it" and slapped a bandage on you. With 8 sons of her own plus two daughters and loads of grandkids, they went through a lot of KIP!
Friday, February 06, 2009 12:09:00 AM

Nicole said…
Ooooh no. I would go through just about anything rather than take Pepto Dismal. Do you remember Kaopectate? It was white and chalky and fixed diarrhea? I feel the same way about that. At least now it comes in a pill.
Saturday, February 07, 2009 11:47:00 AM

Lynn E said…
I hate to admit it. With other things like heartburn and gas and bloating and the dreaded runs... I have the Pink Stuff. Along with multiple different items, tums,gas x, eno and other all residing in my medicine cabinet. Best thing I like is ginger tea. I grate some frozen root and simmer with lemons and drink that
Monday, February 09, 2009 1:53:00 PM

Barb said…
I'm not a fan of the pink liquid myself but they now have pills you can chew (still not a fan) and pills you can swallow ~ and I swear by them. I can't tell you how many times they've made me feel so much better.
Wednesday, February 11, 2009 10:21:00 AM