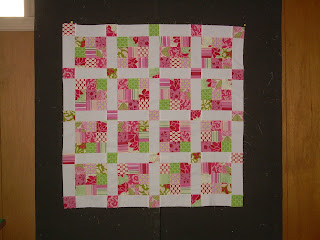 The quilt for Adam and Kate's baby is all put together.

Sherry is coming over this evening and we'll see if she likes it. If it isn't to her taste, no harm done -- there will be plenty of babies coming along and it will find a home.

I suspect, though, that she will like it. I thought about whether to put on a border and decided I like it very well just as it is -- it seemed to me that a border would detract rather than add to the overall look of the little quilt. 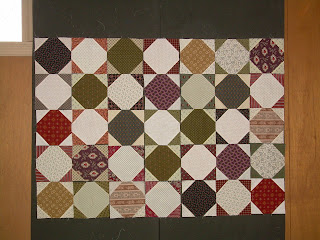 I mentioned previously that I'd been making Civil War snowball blocks. I don't think of them as snowballs, though. When I have them up on the wall next to each other, they make me think of a honeycomb pattern and so I've been thinking of this as the Honeycomb Quilt.

It's turned into a Leader-Ender project, so the remaining five rows will take some time to get done, but there's no hurry, really. The [likely] designated recipient won't need it for more than a year.

It's kind of fun to cut components for six or seven blocks and put them on the table for Leader-Endering. 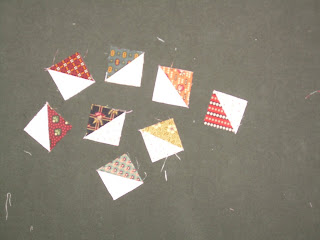 Back when we made the batik and black snowball quilts to swap, Turbo saved all of the trimmings to use in a border. I don't believe she has finished that quilt, so I don't know how it turned out, using the trimmings in the border. But Turbo generally knows what she's doing and I know she would counsel me to save the trimmings from this quilt. Actually, I've not only saved, but as I was putting Adam and Kate's quilt together, as a Leader-Ender I sewed trimming triangle pairs together and have quite a few of them at this point. It will be fun to see what becomes of them.

Tanya said…
Your quilts are looking wonderful. I've got a bunch of those little triangles too left over from some project when I was double sewing those corners. I wondered if they were worth saving but they've come in handy when making small blocks for a Mini-Round Robin or spicing up a Wonky Word quilt (a couple windmills). Happy quilting! I wish I had a three day weekend too!
Monday, February 16, 2009 6:50:00 PM

debijeanm said…
There are lots of stories of in-camp snowball battles (involving thousands of men) during the Civil War. I love that there are quilt themes to commemorate them.
Tuesday, February 17, 2009 9:02:00 PM

Janet said…
The cot quilt is lovely, it was a good use of the fabric. Snowballs, well such a simple but effective block You made good use of your time.
Friday, February 20, 2009 4:38:00 PM

Anonymous said…
When I sew corners like this, I turn the block and sew 1/4" away on the other side right then. When I cut it, I only have to press and make sure they are all trimmed to the same size. =)

Love that baby quilt, and I'm sure she did, too. Very cheery looking.