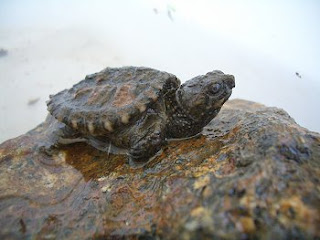 Long-time readers of this blog may recall that each year, just around the time that school lets out for the summer, someone or someones come to spend the coming months in my office. The head of school and I become foster parents for a member of the lower school science department.

The first year we had Fig, a most amiable and interesting newt, and the following year we had an anole named Survivor. You can read all about their adventures, such as they are (although there's one really good story about Fig) by going here. So that brings us to last year when we were fortunate to accommodate a quartet of fire-bellied toads who were nameless upon arrival. I put the question of names to my readers and Fitzy came up with One Potato, Two Potato, Three Potato, four and the deal was done.

Well, after three years of responsible reptile/amphibian fostering (including weekly trips to the pet shop for their live crickets dinners), we've proven ourselves. This year, we've qualified for a turtle, and so a baby snapper (who bears a striking resemblance to the downloaded picture above), with a total shell area about the size of a half-dollar, who was apparently born last autumn will be our companion. He/she didn't have a name so I looked for something ambiguous. My husband suggested "Watch Your Fingers," which I thought was great and the science teacher shortened it to WYFI and hence s/he is named. I don't expect to have a lot of interesting reports of this new roommate, if any at all. But I did feel obliged to report the arrival!

Nancy said…
I'm new to your blog, but if you have any other pets, be careful of them. We had a curious kitty that checked out a 10" diameter mama snapper from the pond we used to live near. Willie the kitty was trying to sniff and check out the turtle, thank goodness he was quick. Mama turtle was a little irritable and JUMPED up to bite Willie's nose. Willie jumped back and instead of losing his nose, just had a nasty scrape. From that time on he gave a wiiiiide berth to any and all turtles, including even the little silver dollar sized babies. WYFI is a very good name.
Friday, June 05, 2009 8:00:00 AM