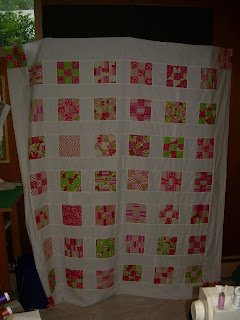 More than a year ago, I won a giveaway that Mrs. Schmenkman was having. It was a collection of absolutely delicious FQs, and I fondled them for a good long time before cutting into them to make a quilt for Sherry to give to her friend Adam for his new daughter. I loved the way the pinks and greens got along with each other, and I liked them on the white background. I had a fair amount of fabric left over, and since Sherry had liked the baby quilt so much, I thought that someday I'd do something for her with the pink fabric.

Then a couple of months ago Amanda Jean (thank you, Liz, for jogging my failing memory!) was motivating people to start a nine-patch quilt with white sashing. Her sample was enticing -- it was so crisp and clean. I couldn't resist. I plunged into making organized nine-patches out of the Schmenkman left-overs. I tried setting them with a narrow lattice the way Amanda Jean did, but there was so much going on in the blocks that Joe and I both felt that they needed some space! I tried a lattice 2/3 the width of the block and found that to be just right. I had four blocks more than I needed, so I made a 6" border and put them in the corners. They don't show up well on this picture, but I think you prolly get the idea.

So, it is a finish! A nameless finish, but a finish nonetheless. Dare we continue to call it Mrs. Schmenkman's left-overs? I think not. How about Strawberry Kiwi Daiquiri? I could live with that. Could drink one, too, it's humid Near Philadelphia!

Unknown said…
I like this even better than the original with coloured cornerstones - I've seen a few quilts around blogland where the coloured parts float in a sea of white - they all look crisp, clean and very much spring/summer fare. Think the name is perfect :o)
Wednesday, July 01, 2009 3:05:00 AM

*karendianne. said…
Oh Nancy, what a GREAT QUILT. I love how you pulled this together. I really like that use of the four corner blocks in the border. Clever you are!
Wednesday, July 01, 2009 6:38:00 AM

graceamazes said…
Love the name -- Pour me one while you're at it!