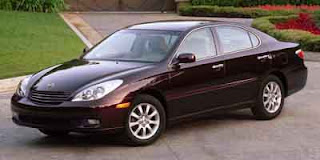 From the time we became a two-car family, the policy was that Himself would get a new car and I would get his old car. Made sense; he drove a lot more than I did. Then, one day back in the early 90s, I got this notion that it was about time that I had a new car for a change. The one I was driving was finished; it was ancient and didn't owe us anything. And I was doing more driving than I used to. So I went to the dealer with my brother-in-law along for moral support and bought a bright red Toyota Corolla. The dying car was a Toyota and had served us well. And the dealership was within walking distance of home. The red Corolla was a no-frills vehicle, but I didn't care. I enjoyed that car and the kids, all young adults of driving age at that point, loved it.

About five years ago Tom was moving out of Manhattan and he needed a car. Not just any car. He wanted the red Toyota. So it was once again time for me to get a car. I knew I'd get another Toyota, but didn't especially want another Corolla. My thought was that if I bought a gently used vehicle, I could afford a Camry or perhaps even an Avalon. I was ready for something a little more comfortable. Joe was delighted at this logic and off we went to the dealership's used car lot where the first car that caught my eye was the most beautiful thing I'd ever seen.

It was the color of an eggplant, only kind of iridescent. I swooned. The salesman ambled over at that point and I asked him if the car had a cup-holder in the front and a rear-window defrost, the only two things I really cared about. I was dazzled by the color. After being assured that the car had those amenities -- and several more -- I was ready. "Nancy," Joe said. "That's a Lexus." I didn't care what it was -- it had everything I needed. And, oh, the color! And I told him that. He spoke about the notion of spending a little less money by buying a used car. We walked over to look at the new cars and it turned out that the Lexus was only a little bit more than a new Camry.

Did I ever mention that I'm married to a very wise man? He knows when he's beaten.

Oh, how I've loved that car! The seats are comfortable, oh so comfortable, and made of real black leather. The lights go on and off automatically. So does the windshield wiper, for crying out loud. The cup-holder is everything I'd imagined and so was the rear-window defrost. And there were other wonderful surprises.

After five years, a while back the first little problem emerged. If I drove more than three hours (which I do perhaps once every other year), the "check engine" light would come on. The first time it happened we were on a trip and the Toyota dealer we went to couldn't find anything wrong. The second time it happened I took it back to my Toyota dealer, who's serviced the car all along. Again, nothing wrong. It happened again on our June trip to Wellsboro, so I decided to take it to the Lexus dealer for a check-up.

Went there yesterday and what a luxurious experience it turned out to be! First I was offered a complimentary ride to a SaladWorks or a Perkins to pass the time, along with a guest check for one or the other. I opted out, and found the waiting room which held comfy leather furniture (must have been made by the same folks that make the car seats!), an oriental rug, a fridge with complimentary chilled beverages, a lovely coffee maker, and a platter of freshly baked oatmeal and chocolate chip cookies. There was a computer available for my use, if I desired, or they could tell me the code for the wireless. There was information about a ride to a barber if I needed a haircut or to the nail shop if I needed a manicure while I waited. And when the service was finished, my baby was returned to me freshly washed and vacuumed! They'd even dusted the cup-holder!

I'm not due for a car for a few years yet. But there's no doubt what kind I'll get when the time comes. And no doubt what where I'll go for it.

Just look at my reward for deciding on a used car!

Karen said…
We are also big fans of Toyotas, we've had 8. And a Lexus is even better, haven't had one of those yet.

Mrs. Goodneedle said…
Love it, I'd say the customer service is a luxury in itself, even worth repeating. I hate waiting for cars to be serviced, maybe if I had a Lexus I wouldn't! Enjoy~
Thursday, July 23, 2009 6:22:00 PM

Lorraine said…
Oh Nancy - I love your logic!! If you are going to get a used car - might as well be a Lexus!! I am a Honda girl and the dealer here treats me very well.....I have the car picked up from work and returned to me when it is done and when it is time to get a new one I just phone and say .."it's time"...LOL and they organise everything for me....you can't beat great service....and comfy reliable cars....that are a cute colour of course!!
Thursday, July 23, 2009 8:04:00 PM

Guenveur in Kent said…
I bought my first used car ten years ago (It was only one year old, had only 10.000 miles on it and 2 years left on the warranty), but it's not a luxury car, it's an Escort. Runs well, but is not very comfortable on long trips. At my age it would be nuts to buy a new car, so I'm going with it until I can't drive any more.
Your car is GORGEOUS! I love that color. You deserve the luxury of a fine car and a plush waiting room, too. What fun!
Friday, July 24, 2009 12:47:00 PM

Kimberly Mason said…
OMGoodness, can you really blame a gal for falling for an iridescent eggplant WITH a cup holder and a rear window defroster? I'm swooning just thinking of it myself. What a wise, wise, wise and wonderful man your man must be!

StitchinByTheLake said…
It's getting close to time for me to get a new car though I'm still putting it off for a while. I've had one Toyota which turned out to be a lemon but I might give them a try next time because I really want a mini van I think (grandchildren, you know) and I like theirs. blessings, marlene
Friday, July 24, 2009 4:22:00 PM

Salem Stitcher said…
Our Lexus dealership offers Starbucks coffee in the waiting room but I usually take it to the Toyota dealership for service because it is much cheaper. I'm on my second used Lexus and I'm hoping to put at least 300,000 miles on it before I have to even think about replacing it.
Friday, July 24, 2009 10:33:00 PM