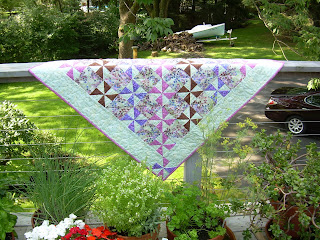 Just because I've not written much about quilting recently doesn't mean that I've been cleaning the house or anything. I've been quilting away! Back in May when we visited Richmond, Anastasia picked out a terrific batik for a baby quilt for friends of hers and Tom's. We found great coordinates and I came home and fairly quickly started piecing.

I think pinwheels are nice for babies and really enjoyed piecing these. When the top was all done, I decided that this little quilt warranted hand quilting. And the commencement of same coincided fairly nicely with the start of the Tour De France. I finished before Alberto did, however, and got a picture of the quilt this morning.

I expect to give this to Tom and Anastasia in a week or so; the baby girl is due sometime at the end of August. Initially I thought of the quilt as Mint Chip but for some reason as I was quilting I started calling it "Spumoni," and Spumoni it has stayed.

Joe picked out the border design and it took a long time to do. I enjoy hand quilting, but don't feel confident with getting the layers secure for anything bigger than a baby quilt. A long-armer I know offers a basting service; I've kind of delayed sending her anything, not sure why. Then I learned that the local long-armer also will baste. I have a couple of nice CW tops that are all done and I think hand-quilting would be what they would like. It would be nice to have them ready to work on when cool weather sets in. So I'm hoping to piece two backs this weekend and connect with the bastress this week.

Meanwhile, having received back no fewer than five quilts from two different long-armers, I'm into a binding marathon! Stay tuned!

Unknown said…
Oh this has turned out beautifully Nancy - the pinwheels pick up the colours in that gorgeous batik perfectly - whatever the name they can't fail to be totally delighted with this - just delicious :o)
Saturday, July 25, 2009 12:39:00 PM

Gretchen said…
Beautiful quilt! Kudos for hand quilting; I would never get anything done if I hand quilted. WOW five bindings to do--can't wait to see all those finished quilts!!!

LoieJ said…
You get more quilts done than anyone I know. I really like the pinwheel in the corner.

Tanya said…
My goodness! You are gettin so much done! (I'm reading backwards on your posts.) So good of you to set all those lovely patterns back into the world!

The baby quilt is adorable. I have used the same border quilting pattern on some of my baby quilts. It always brings a smile!
Thursday, July 30, 2009 7:05:00 PM