I found four more patterns that need good homes. And I think once they are gone, this time of pattern purging comes to an end. Check below to see if any speaks to you.

This Puzzazzle pattern comes with enough foundation piecing sheets to make a quilt that is 56" by 70". I'd signed up for a class at the LQS and at the last minute got sick and was unable to attend. Which left me with the pattern, instructions, and foundation sheets. At one point I thought I would try to figure it out and make the quilt myself. Over time, my fascination with the design diminished.

But it is new to you, perhaps, and perhaps you'd like this pattern and foundation sheets. If so, lemme know. First to reply gets it in the mail this week. Leave a comment and be sure to say you want Puzzazzle. And email me your snail mail addy. Update: Graceamazes is taking this gem off my hands. 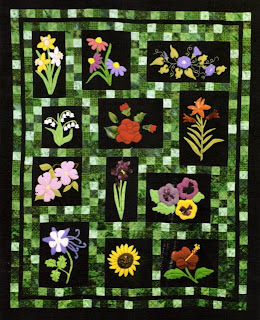 I loved the buttonhole applique project I did that became Woolly Garden. It took some time to do, and I didn't care. I just enjoyed it so much. When I finished, I thought I might want to do something similar. I came across this pattern for Midnight Garden which would be sensational in wool. And around then pretty much lost my passion for wool -- partly due to the price of the fabric!

I imagine it would be lovely in fabric other than wool. But I'm not going to find out. It's a gorgeous pattern and someone will enjoy making it.

Would you like this pattern? Be the first to claim it. Again, leave a comment and say you want Midnight Garden. And email me your snail addy. Update: Going out to Karrin in tomorrow's mail. 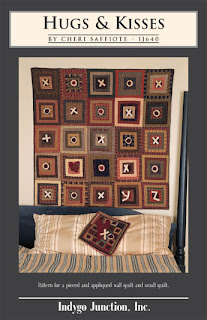 Isn't this cute? Wouldn't it make up nice in some of that plaid that you bought and don't remember why? It's one of those nice Indygo Junction patterns. I think someone passed it along to me when she realized she wasn't going to do it. It's been in my pattern drawer for a long time and it's time to get it out and to its rightful owner. Who just may be you.

If you want Hugs and Kisses, leave me a comment and email your snail addy to me. Again, first respondent gets it. Update: Won by Tricia.

Pattern Number Four has no picture. I don't have a scanner and can't find a picture by Googling. The pattern is by Kathleen Brown and is dated 1991. It's called Mittens! Mittens!and was published by Of My Hands, in Keizer, Oregon. Can't find them either. The pattern is for fabric mittens, sized infant to adult.

I'll be happy to send it to you if you are the first to ask for it. You know the drill by now -- comment and email with snail addy. Won by Laurel.

I want to get these in the mail to their rightful owners this week -- before I change my mind! -- so there just isn't time to draw names.

What a good feeling this is.

Update: Didn't take long to have these goodies snapped up. They'll be going in the mail before the week is over. I think that is the end of the patterns for grabs; stay tuned in a couple of weeks for blocks and fabric.

Tricia said…
I would love the hugs and Kisses pattern please!

Look at you cleaning house!

LoieJ said…
Isn't it good to be realistic about what you might really accomplish and how your tastes have changed. I've done this a bit.

But recently I bought a pattern because the quilt shop had made a sample that I thought was beautiful. Unfortunately, the picture on the pattern isn't beautiful. Plus, a special template is needed and no shop seems to carry that. Phew.
Tuesday, July 28, 2009 8:46:00 AM