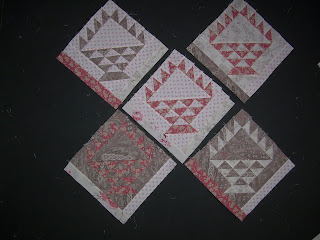 A snow day. Followed by a second snow day. Bliss.
Here's what's happened vis-a-vis Rouenneries.  First I went through my block books and selected six different 9-inch baskety blocks.  Next I untied the FQ pack of Rouenneries and assigned four or five FQs to each of the baskety patterns.  That way, when I mix up the baskets into their foursomes, I won't have to think about whether a fabric is being repeated in the foursome.  I had a  few FQs remaning and consigned them to "emergency" duty, for when I run out of a designated fabric.
Then I began working on the six Basket of Triangles blocks.  Nearly ran out of the gray fabric and, in fact, some of those wee triangles are actually pieced!  Used one of the "emergency" fabrics for the setting strips on a couple of them because the gray was truly gone.
I am loving it.  I am loving the baskets.  I am loving the fabrics (more about which in the next paragraph).  And I am loving the slowness of the process.  A few months back I realized that for the most part, I'm not interested in making quick quilts.  Sure, there are and will be exceptions to that.  But what I want to do now is make more intricate quilts, the kind that take some time to do right.
My project is crying out for a name.  I simply can't call it "Rouenneries Baskets" or something like that.  For one thing, gorgeous as the fabrics are, I really don't know how to pronounce the name.  I have virtually no French at all.  So I don't know if they are ROO-en-nerries or roo-ENN-erries or even rou-enn-err-EEES.  And I don't care much.  I'm just waiting for inspiration to strike.
Other happenings here on our first and second snow days of the year:  Himself has been out multiple times with the snowblower, doing the driveway, the walkway, the sidewalks, and the walkways for our neighbors.  One of whom thanked him with a nice bottle of wine!  Also, yesterday, for the first time in his life he made bread!  We have his late father's recipe for a delicious dill seed and rye loaf that all of the family calls "Grandpop's Bread."  Makes six loaves.  So, anticipating the snow day, off Himself went to the grocery store with his list, and spent much of yesterday afternoon at his task, calling for multiple consultations and leaving a fair amount of flour and crumbs about.  But I don't care.  The end result was delicious.
And I finished the new John Irving, Last Night in Twisted River.  Got off to a slow start, but classic Irving with a bear, an imagined bear, a bit of mutilation, some echoes in the plot, and just generally fine, readable writing.
And now Polly's rumoring about a possible cancellation of tomorrow's in-service day.  Bring it on!

Pamela Kieffer said…
I agree with you, I have gone back to complicated blocks. I always prefer appliqued quilts for myself and cannot understand why anyone keeps sewing those strips and squares together.
My daughter teaches in Alexandria, VA and they have not had classes since last Thursday They will start back on Monday. The snow here is unreal. I think your area is getting their share.
Thursday, February 11, 2010 11:29:00 PM

antique quilter said…
you can send me a loaf of that bread , sounds so yummy!
love the basket blocks, very nice.
enjoy your long weekend
routing for you to have today off too!
we are back to school today :(
Kathie
Friday, February 12, 2010 4:31:00 AM

Guenveur in Kent said…
I don't know about the berries part, but Rouen is pronounced roo-ahn. But what's in a name? The same pattern in any other name would be as sweet.
Glad you're having time off. I love John Irving, soI think I'll have Sally grab me a copy of that one. Ity's nice having a librarian daughter.
Friday, February 12, 2010 12:54:00 PM