The Bag of the Day 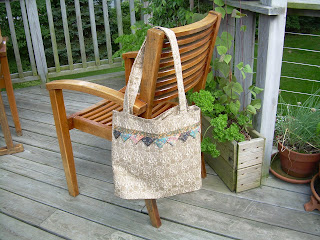 This one might be my favorite.  I don't know how many yards of that nice tan William Morris fabric I had to begin with, but I tell you, I've made three bags now, and there is still a fair amount left!  The prairie points are scraps of Bill.

While I was digging around in the Bill bin, I found a dozen 12" blocks from one of those swappy kinds of things where you send out a focus fabric and people each make a block and return it.  I put them up on the wall and some went together better than others did; one was really way too bright to play with the rest of them, so I took him down and took him apart and will replace the very vivid orange with something a little quieter.  I think the rest of them will do well together after that, and I believe I'll try to get a top assembled out of them this summer. 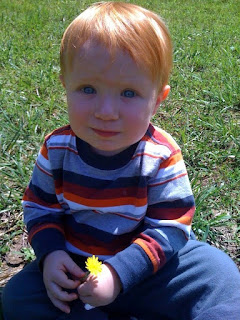 I've started a new Leader-Ender project this week, but this isn't it. This is dear Nate -- Anastasia sent the photo this afternoon.  It is so hard that he is so far away.

Back to the L-E project, however.  I've got a big Rubbermaid tub of CW pieces, mostly smaller than a FQ and a smaller tub of CW shirtings and backgrounds.  I've always liked the cactus pot block (Diana, that link is for you!) and am making it super scrappy in the eight-inch size.  I've started with the largest section and I'll need 21  units for the 6 by 7 quilt I've got in my head.  It will be a good while before there is anything to share, but know that slow progress is occurring.

Anonymous said…
So cute. That is why we still live in CA w/high taxes - the family members are no more than one short hour away and some kids/grandkids/greats are within walking distance of each other. Janet's family on same property. Am I to assume I am the Diana? Your CA cuz
Friday, July 01, 2011 6:15:00 PM

Arlene said…
The bags with the prairie points are lovely. What
pattern did you use? Nate is absolutely adorable.
We had our first great grandson join the family 2 weeks ago. They live near Boston, so it will be about a month before we get to meet him in person. Can't wait to hold him!
Sunday, July 03, 2011 12:19:00 PM