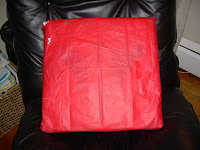 Today was an in-service day at school; we had assorted sessions on identity and racial diversity and the embracing of both.  It was a full and rich day and, as so often is the case, tiring.  All of that thinking, reflecting, learning just wears a body -- and a mind -- out.  So I was happy to be able to leave a bit earlier than usual.  When I came home, I was delighted to find that the postman had come bringing many things.  First was the last of the parcels for the swap I organized a few months back -- it had been mailed the day before Thanksgiving and took this long to get here from North Carolina.  But now it is here, at last, safe and sound, and this weekend I shall swap out the blocks and return them to their rightful owners.

The second parcel that he brought contained the inviting and enticing red package above.  It was mailed after the one from North Carolina, all the way from Australia from Annette who received my name in Chooky Blue's annual SSCS adventure.  I am trying to be obedient and not open this parcel until Christmas morning, but have little hope of success, now that I have visited Annette's blog and see what beautiful things she makes! 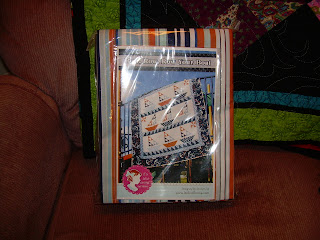 Now you and I both know that I am seldom one to purchase a kit  for a quilt.  But I had seen this kit on a post from the Fat Quarter Shop some time back and was utterly smitten with it.  Recently they had a sail sale that was too good to pass up and so I indulged myself and the kit also came in today's mail.

I do believe that this would be a nice quilt for a certain young boy in Richmond who is going to get a new brother or sister at the end of April -- it would be delightful to have this made and ready to take to him when I go to meet the new baby, don't you think? 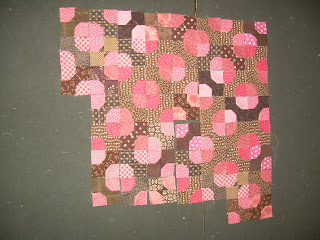 I'd been feeling remiss that I hadn't posted any quilty pics for a while.  That does not mean I have not been sewing!  In the chair upstairs, once I finished stitching the ornament I made for the SSCS swap (no pictures permitted at this time), I have been hand quilting Rhett Butler Slept Here, which is my default hand project when there is nothing else in the queue.

Downstairs at the Bernina, I'm facing my perennial problem:  the leader-ender bowties that Bonnie Hunter enticed so many of us to work on this year (yes, mine are pink instead of cheddar -- one works with what one has in some instances) rose up and flat out demanded to be made a real project.  I know a little girl who is growing too big by now for the quilt I made her as a newborn, and I plan to get these bowties ready for her sometime this winter. 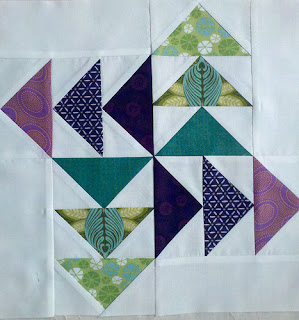 I saw this block on some blog or another sometime this autumn; I no longer remember where.  But I just loved it and still do love it and downloaded the photo and want to make one.  Actually I want to make more than one.  A whole quilt's worth, if you really want to know.

And now the timer for the beef in red wine is ringing so I must go and cook the noodles.

Wishing you Good Things in Abundance.

Janet O. said…
Fun things in the mail--good luck at not opening that package until Christmas. Oh, that makes me think about an old episode of the Dick Van Dyke Show called "The Curious Thing About Women." It involves an inflatable life raft and it is funny. If you've seen it, you know what I mean.
I can see why you purchased that sailboat kit, and it is a great idea to use it as described. There is someone with her thinking cap on!
You pink and brown bowties would make a great quilt for a little girl, too. You have been busy!
Friday, December 02, 2011 5:55:00 PM

Pat said…
So many wonderful things!! That sailboat quilt will be just the ticket for a big brother, especially since he's got to have sailing in his blood (or is it down to the roots of his red hair?). I tend to like cheddar in small doses, so your pink version of the bow ties is more to my liking. And that block! Why do I get the feeling that it just might inspire a swap? The ocean colors are wonderful.
Friday, December 02, 2011 6:32:00 PM

Salem Stitcher said…
I'm sure glad that package from North Carolina finally made it. Yikes!

Denise in PA said…
The sailboat quilt is adorable! I know a certain little boy will love it! And I love the combination of pink and brown for the bow tie. I think I'm going to use that combination. And, beef and red wine with noodles? Good thing I didn't read this last night - I'd have been over! LOLOL!
Saturday, December 03, 2011 8:57:00 AM

Susan said…
I love your pinks and browns - charming for a young girl - or an old one, for that matter. The boy will love the sailboats, and that kit will just make it so much easier to finish. It'll be nice for him to get a present while the baby is getting so many. =) And - yes, I do love that flying geese arrangement! I was thinking of doing one with a strip on both sides, but I may change to just one side, because I do like this block. Live journal and google aren't cooperating the last few days. ~desertsky
Sunday, December 04, 2011 1:00:00 PM