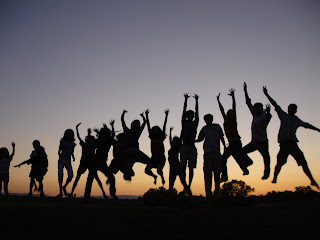 The people in this picture are jumping with joy. Which is how I felt yesterday when I heard the news. Nine months ago, I wrote this sad post when I learned that the pastor of the Roman Catholic church in our town had been placed on administrative leave pending investigation and resolution of An Accusation. The man isn't my own pastor, but I honestly could not have been sadder if he had been.
And now it is [nearly] over. The pastor's ordeal reached the stage of depositions, and the accuser postponed and postponed and finally came to court and the case was thrown out. Just like that. He's not back in his parish yet; apparently it will take a bit of time for the Archdiocese to process paperwork (?).  But his name has been cleared and it is a joyful day not just for the Roman Catholics of Near Philadelphia, but for our whole little town.
If anyone calls for dancing in the streets, by golly, count me in!

Michele Bilyeu said…
Bless you for your rejoicing! It is always sad, and frequently horrendous, when we learn of substantiated cases, but how incredibly awful for the unsubstantiated ones and accusation of the innocent! Merry Christmas and may you rejoice in all ways this holy season!
Monday, December 19, 2011 2:10:00 PM