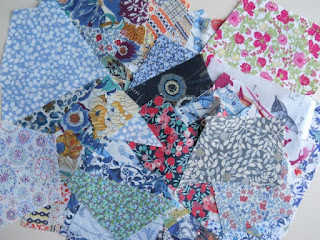 Dear Mike F hasn't let me down. Despite being back to full work hours and less time for sewing, I'm sticking with his system. For now.

I can see that the Cows will be a flimsy within the week. While I'd thought of making a second Cow-ish quilt with the remaining blocks, Julie wisely suggested that I made my quilt a two-sided Cow Project and I think she's right. It's not a great idea to divide a herd. So I'll be moving the heifers into place and trying to come up with a plan for them.

I'm thinking of putting another project into the rotation. Somewhere, somehow, I received a small packet of Liberty of London tana lawn scraps. I fondled them so much that I'm surprised they aren't shredded. They I managed to get some more. And some more. And am thinking of getting a few more. I haven't wanted to do anything with them out of fear of making some awful mistake. But just the other day, out of the blue, I knew what I want to do with them: Cut them into squares, prolly 2", and just alternate them, checkerboard fashion, with the background. I'd picked up some lovely pinot noir color soft cotton to go with them, whatever I decided to do. This could be a nice Leader-Ender project . . . .

The photo above isn't my scraps, though it bears a strong resemblance. It is from the internet. Did you know there are several fine places on Etsy where Liberty scraps can be found?

Char said…
Can't wait to see the cow quilt, front and back.
I have some Liberty my DB bought for me when he worked in London. I've had it for two years and I haven't been able to use it. I do know about the Etsy sellers. Maybe I'll get a few more pieces and take the plunge.
Wednesday, September 05, 2012 10:16:00 AM

Janet O. said…
I'm not familiar with this fabric. Looks very pretty. Isn't it funny how we put off using favorites for rear of ruining them?
Wednesday, September 05, 2012 10:29:00 AM

Barbara Anne said…
Great idea about a double sided cow quilt. It may just be me, but finding a use for two cow quilts wouldn't work here.

What delicious Liberty of London fabrics!! I have a few and also need to fondle them from time to time. They are so sweetly feminine, too.

More cheers for Mike's worthy system and the progress it encourages!!

OT Quilter said…
Love those Liberty scraps. I have some, too and have allowed myself to be intimidated by the idea of cutting them up and making something ugly. I like your checkerboard idea, but I'm still thinking.....
Wednesday, September 05, 2012 4:36:00 PM

Pat said…
Honey, there are sever places on Etsy where EVERTHING can be found. Very dangerous place. I've never worked with Liberty, but they look lovely.
Wednesday, September 05, 2012 7:55:00 PM