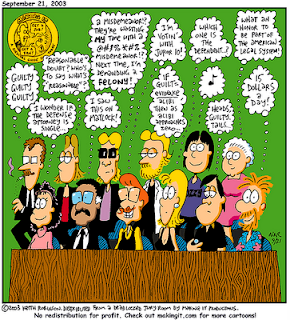 There was a time when I thought I would like to serve on a jury. I thought it would be interesting and a good experience.

Then I grew up.

I came to understand that a person's future would be, to a certain extent, in my hands. What a huge responsibility!

When the summons arrived in the mailbox, therefore, I was not excited. I was hopeful that I would not be selected.

My day began with a short drive on the Pennsylvania Turnpike during the thick of Rush Hour Traffic. I only had to travel seven miles, but the number of cars jostling around from lane to lane was mind-boggling. By the time I arrived at the county seat, I had aching hands from gripping the wheel, a lump in my stomach, and the beginnings of a ghastly headache, the likes of which I've not had in years. I had good directions, and the off-turnpike traffic was minimal, but I was still so stressed that I completely missed the turn-off to the parking garage.

My fellow potential jurors (there were more than a hundred of us, I'd guess) were good-natured and about as eager as I was to serve. After viewing a well-produced video and being welcomed by a judge, we settled in for what we hoped would be a day of reading and pleasant chatter. The marshal then told us that there were two cases that would need a jury; one a criminal case and the other, civil. With Kim's summer experience lingering in recent memory, I was relieved not to be among the 45 individuals sent up to Courtroom B.

The headache had intensified at this point and, of course, there was no way I could get pain medicine. Then the marshal called up 36 people to report to Courtroom E for the civil matter. I was Number Twelve. The judge gave a somewhat rambly introduction to jury duty and some of the facts of the case. The Defendant and the Plaintiff(s) were at tables with their attorneys. He said that the trial would last two days, including that day. A list of group questions was read and we were asked to hold up our number if we had an affirmative answer. The lawyers and the judge then retired for a bit and we were instructed to talk among ourselves. Number Eleven lives about a mile and a half from where I live, and Number Thirteen develops software for drug companies. Eleven was selected to serve; Thirteen and I were mercifully excused. We were thanked for our service and told our obligation was fulfilled for the next three years.

I made my way home, thankful that the turnpike traffic was back to normal, found my ibuprofen, and collapsed, my civic duty fulfilled. My nine-dollar-plus-mileage paycheck will arrive in three weeks. I think it is earmarked for a yard of batik, don't you?

Three Birds Inspired said…
I have received notice twice and was excused before I actually had to go to the courthouse. I was never called in Virginia and was a registered voter from 1973 until I moved in 2000.
As for the batik - did you see the 30% discount from Burkholder's? May want to take that money out early... :)
Tuesday, September 18, 2012 9:18:00 AM

Quiltdivajulie said…
Last week, our oldest son was sequestered for 6 days (his jury was released at 8:45 pm Saturday). He is still exhausted and forever changed by the experience (both defendants were found guilty).

OT Quilter said…
I was called and selected to serve on a Grand Jury a few years ago, and had to report for 9 consecutive Fridays. It came at a very inconvenient time: I was chair of one of the committees as our school prepared for Middle States evaluation. (And because I was an educator, I didn't get paid!) Believe it or not, I enjoyed the whole experience! I learned a lot about how the justice system works, and I came away with a renewed respect for "peers" who felt the weight of our responsibility and who were thoughtful and serious throughout our deliberations.
Tuesday, September 18, 2012 10:48:00 AM

AnnieO said…
Kim's case experience was pretty graphic but I did find it interesting. I have been called for jury duty many times but never served on a jury. Sorry yours gave you a headache before you even got there, but totally am with you on the traffic anxiety that caused it! We no longer get paid for mileage in our county.
Tuesday, September 18, 2012 12:21:00 PM

Paula, the quilter said…
You definitely deserve some fabric for the pain and suffering involved.
Tuesday, September 18, 2012 1:53:00 PM

Bobbi said…
You earned it!

Barbara Anne said…
Yes, indeed, a lovely batik or two would sooth your troubled tummy, relieve that headache, and set your world to rights. Too bad you must wait 3 weeks for that check so hope Tums and that Ibuprofen will handle the upset in the meantime.

I've been summoned for jury duty in Louisville and in Waco, but happily, no one ever wanted me on their jury because I'm a nurse. I begged off here as I'm needed to help with FIL's care and AMIL's medical appts. If I'm excused remains to be seen because the summons is for 2013.

Nann said…
I've been called once. I had to reschedule and had the wit to choose Thanksgiving week. Because that is a short work week I figured that they wouldn't have any complicated cases. As it turned out, I was not needed.

The irritating thing was that they confiscated my scissors. That was before TSA was foisted on travelers, and thus before I got one of those Clover disc cutters.
Wednesday, September 19, 2012 7:56:00 PM

Anonymous said…
I get called on A LOT. And since I'm a retired teacher I recognize MANY. I finally started saying when questioned, "Well somebody must have done something wrong or we wouldn't be here". THAT will get you excused. Sorry to be grumpy but in ten years I've been called 7 times. Here they get names off the voter rolls. BLAH!
Thursday, September 20, 2012 12:58:00 PM

Salem Stitcher said…
I get called ask the time it seems but so far only.made it inside a courtroom once and.that time I was dismissed. Last time I was.called, a fellow quilter friend was also called and we spent a lovely day doing handwork and catching up. I actually wouldn't mind serving...one day.
Thursday, September 20, 2012 10:31:00 PM