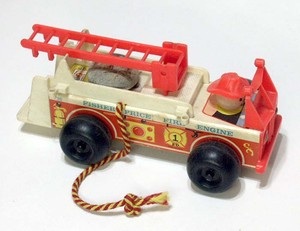 When one of my children told me that his son would like a fire engine for Christmas, I jumped on the suggestion and found myself at Amazon in no time. I've always had a kind of a thing about fire fighters. In our town, the fire department is all volunteers. We used to live very close to the fire house, located in the main little shopping district, and frequently I'd be coming out of the mom-and-pop grocery store, hear the siren sound, and watch as men sprang out of the cycle shop, the appliance store, other businesses, and sprint toward the fire house. I'd get a lump in my throat -- that these men would run to risk their lives for people that they may not even know. It was almost incomprehensible.

In my last post, I alluded to a recent tragedy in our community. A young man, one of these amazing fire fighters, was killed while he was at work as a tree surgeon. He lived very, very close to my house, and although I did not know him personally, his story hit me very, very hard. David was younger than my youngest child. The other day, when the impeccably clean and shiny fire trucks led the funeral procession down the street, I couldn't stop the tears from coming. Such a terrible, terrible loss.

Years ago, someone I didn't like a whole lot said to me, "In every bad thing, there is something good that comes out of it." I scoffed, wrongly interpreting Jean's remark to mean that whatever this elusive "good thing" was, it somehow justified the bad thing. Those words came back to me this week.

The young families of our town -- in the face of David's loss -- have been nothing short of heroic. Giving in to that insatiable urge to do something, while he was still in hospital, they had organized a meal train to provide food for the young mother and the people caring for the children while she spent her days with him. Believing he would have a long recovery, they began to plan fund raisers, including a large event, a beef-and-beer, to be held next month. I, too, felt that do something urge and while my days of attending a beef-and-beer are long past, I imagined there would be a raffle and I contacted someone to donate a quilt. A girl woman in her late twenties showed up at my door to pick it up. She apologized for being late -- she and her husband had spent the day at the home of the injured man, putting up the Christmas lights, trimming the tree, dealing with a plumbing problem. She looked exhausted. And terribly, terribly sad. As she told me that hope was gone and life support was to be removed that night, we fell into each other's arms and cried.

This woman, way too young to be dealing with such horror, has now "friended" me on Facebook. Her posts alternate between expressions of her sorrow and the practicalities of what is still needed for the beef-and-beer. I've reflected on the whole experience and find that at last I understand a piece of what Jean was saying back then. David's accident and loss have provided the young families an opportunity to be their very best selves, to grow up faster than they normally would have, to minister to this family.

This woman, this Christy, is tireless in her efforts to help her friends. To my way of thinking, she's every bit as much a hero as the fire fighters that she loves. Her parents must be so proud of this gal that they've raised. She is being her very best self. And I'm moved by her maturity, her generosity, her selflessness.

Lori said…
Geez, now I'm tearing up! it is so true what you say. My prayers are with the family and the town as they (you) all mourn this loss, but somehow brings everyone together.

Synthia said…
Such a sad story about the loss of a young husband and father, but a beautiful story about the kindness of friends and acquaintances. Thanks for sharing.
Saturday, December 08, 2012 7:02:00 PM

Pat said…
The family of this firefighter was brave indeed. In the midst of their sorrow, they found it in their hearts to donate his organs so that others might have a chance for a full life. I learned this from a dear friend of mine, a volunteer firefighter in a town that is very close to this young man's. my friend knows what he's talking about, having been gifted with a new heart himself several years ago. What a selfless gift!
Saturday, December 08, 2012 11:33:00 PM

suz said…
You told that so beautifully. This is when we need to remember not to sell the young people short ... all too often all we here about are the wackadoodle celebrities and celebrity wannabees and think all young people are like that.