The Quilts I Gave for Christmas 2013 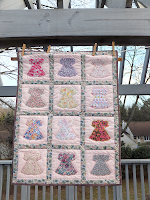 Three of the grandchildren received quilts for Christmas this year. Aberdeen's is a wall hanging for her room. I've shown it on this blog before; I'm so pleased with it. I made it all from Liberty tana lawn scraps and hand quilted around each little dress.

Joe made a hanging bar for it.

I believe you can enlarge the photo by clicking on it. 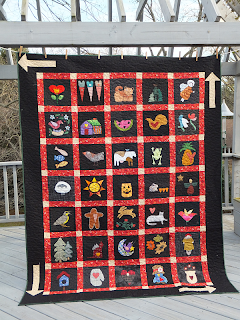 Nate's quilt was made by putting together most of a big pile of swap blocks from ancient times. Dear Susan ran a swap of primitive-type applique on black and at one point each block had to contain a heart, a star, or a bird (I think). I was enchanted with this swap and apparently had lots of time on my hands because I swapped literally dozens of blocks.

I thought they would make up into a nice quilt for a big-boy bed, and that they would be interesting for someone who is three-going-on-four -- could play "I Spy," looking for the kitty, the cow, something to do with Christmas, etc. 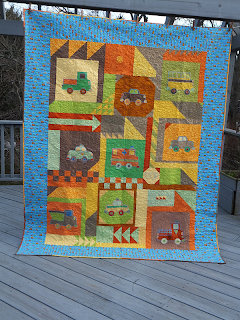 And then there is Eli's big boy bed quilt, my favorite gift that I gave this year. This quilt gave me fits when I started. First of all, the pattern I started with was for a crib and contained twelve blocks. I knew I was going to hand buttonhole all of the pieces, so I went down to nine blocks. And then enlarged them. A huge problem was that when I didn't prewash the fabrics, the bonding didn't take, and the pieces were destroyed. So off I went to buy additional fabric, prewash, and recut. The hand-buttonholing was done in front of Netflix, and I used the same blue thread as the background of the border. I'd chosen all of the fabrics from the border colors.

When I was putting it together, Joe said it needed a STOP sign, so I made a snowball and he drew the letters on for me to embroider. I had a lot of fun designing all of the filler blocks. I laid it all out on graph paper and it all worked out according to plan. 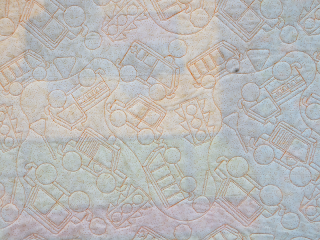 When I took the quilt to the machinist, I was thrilled to discover that she had a transportation design where the shapes of the vehicles were practically identical to the shapes of the appliqued vehicles. I had thought she should quilt it in yellow or green, but she suggested the orange and I know from past experience that she is never wrong! 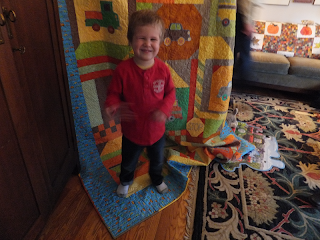 And here's Eli, pleased as punch with his new quilt.
He does have hands, actually; he just can't keep them still!

Barbara Anne said…
What wonderful, well made, beautifully quilted, and utterly delightful quilts you created and so personally suited to their new little owners!!!! Applause, applause!

Thanks for sharing these glorious quilts with us!