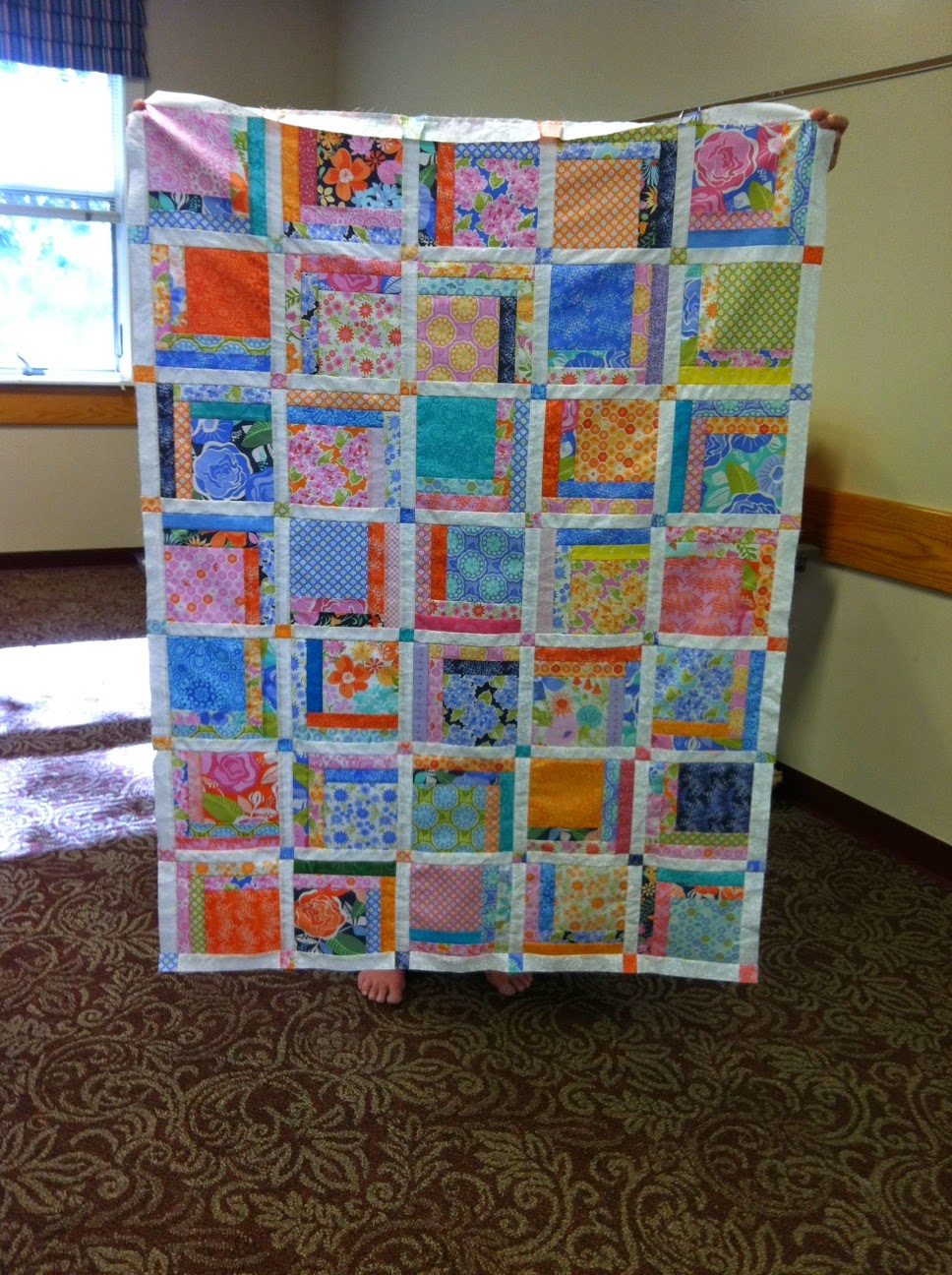 Seven-ninths of the Renegades spent the past weekend at Black Rock Retreat Center. We were housed in a cute little A-frame house, just a few steps away from the main building where the meeting/work rooms are located. We missed our absent two-ninths members a lot.

We all got so much work done! This beautiful finish is Marsha's gorgeous project that she put together with blocks she had brought along. Couldn't you just picture a lovely nap under this treasure? Or as a tablecloth for a most elegant tea party?

I had finished the last of the nine Monster blocks just a couple of days before we went away, and I stopped at Gene's to buy fabric for setting the blocks. I was still having discomfort with the knee during the retreat (I had stopped the regular taking of the Advil for the inflammation, foolish me), so it took me a while, but I did get it together and it is off to the machinist today! Photo will be shared after it is gifted to Glorious Grandbaby #6 for his mid-December second birfday.

When we retreated last April, Kathy had organized a block swap called "Black and White Retro TV Stars," and the blocks it yielded were just marvelous.

Honna put hers together and we never got a photo before she gave the quilt away as a wedding gift. I don't know if any of the other participants have completed their tops, but Kathy brought her blocks along, finished wonkifying them, and assembled her top. 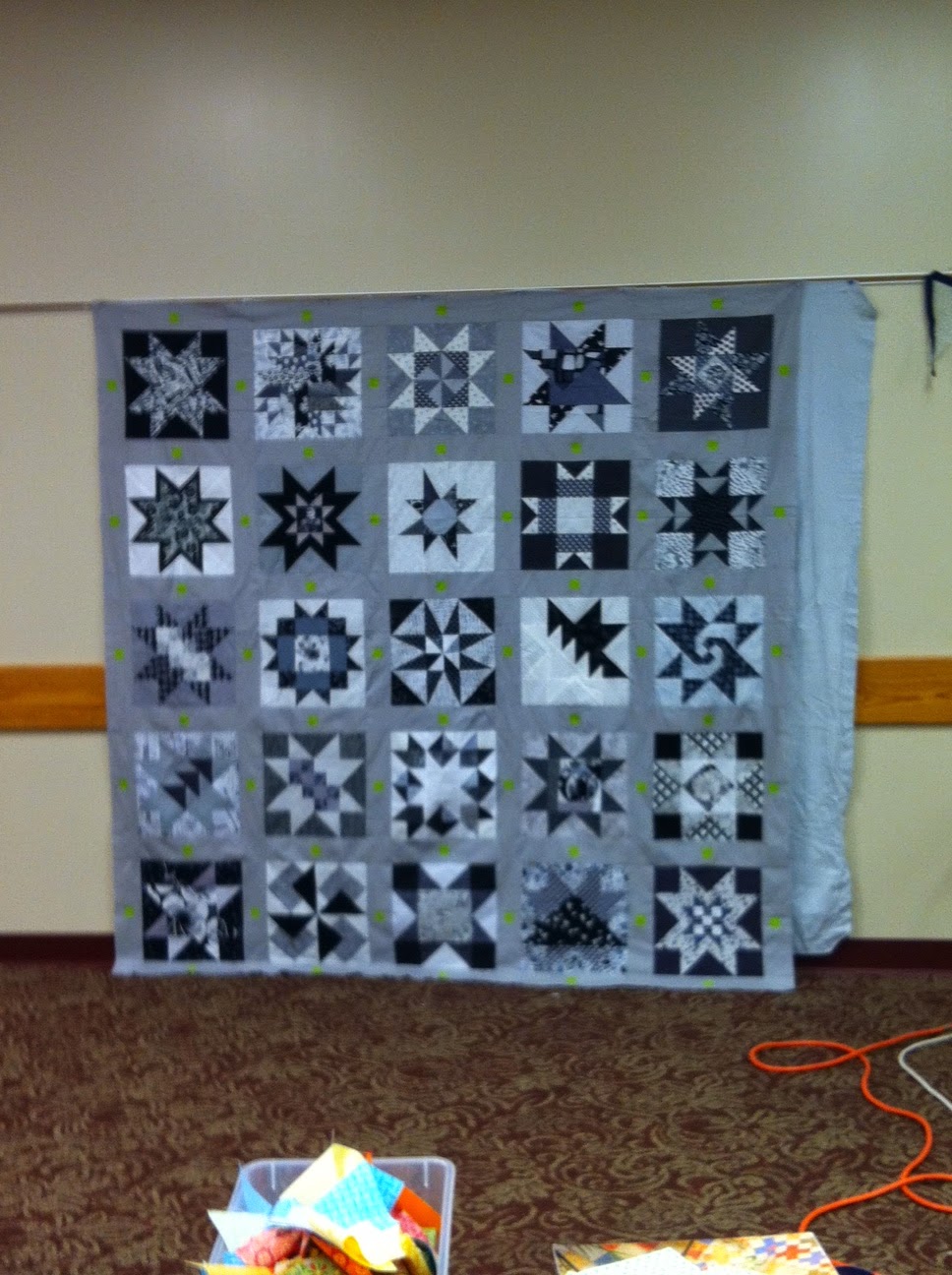 I had started putting mine together at a sewing day late last spring, completed three rows, and the day had come to an end. After the Monsters were finished, I laid these out and returned to work on them.

It didn't take long to get it all finished. If you click on the photo to enlarge it, you can see the tiny lime detail in the sashing (Bobbi's idea way back when). When it comes home from the machinist, I'll use that same lime for the binding.

I think it will be a gift for an upcoming wedding (date as yet unannounced).

Before we had to pack up, I got the first two of three borders on Polar Vortex and as soon as I get unpacked and completely resettled, my intent is to get that final border on so Polar Vortex can be finished before another Polar Vortex comes around!

Barbara Anne said…
What great quilt tops and a great setting for great friends to get together to have great time to sew! Great idea to use the time to set blocks into a top and to add borders.

Love the lime green and in such unexpected locations, too!

As a kid of the '50s, I so relate to the black-white-and shades of greys in these wonderful (or should I say "great"?) blocks from the swap. When the 1st family on our block got a color TV, I learned to my amazement that Mr. Greenjeans of Captain Kangaroo fame actually wore GREEN jeans. How about that?!

Anonymous said…
What a delightful time and place it sounds like! The quilts are wonderful, and very gift-worthy.

My last week has seen some blocks your group sent go into a large lap quilt and a baby quilt. Both will go in the next box to American Heroes. Thanks so much!
Wednesday, October 29, 2014 3:17:00 PM