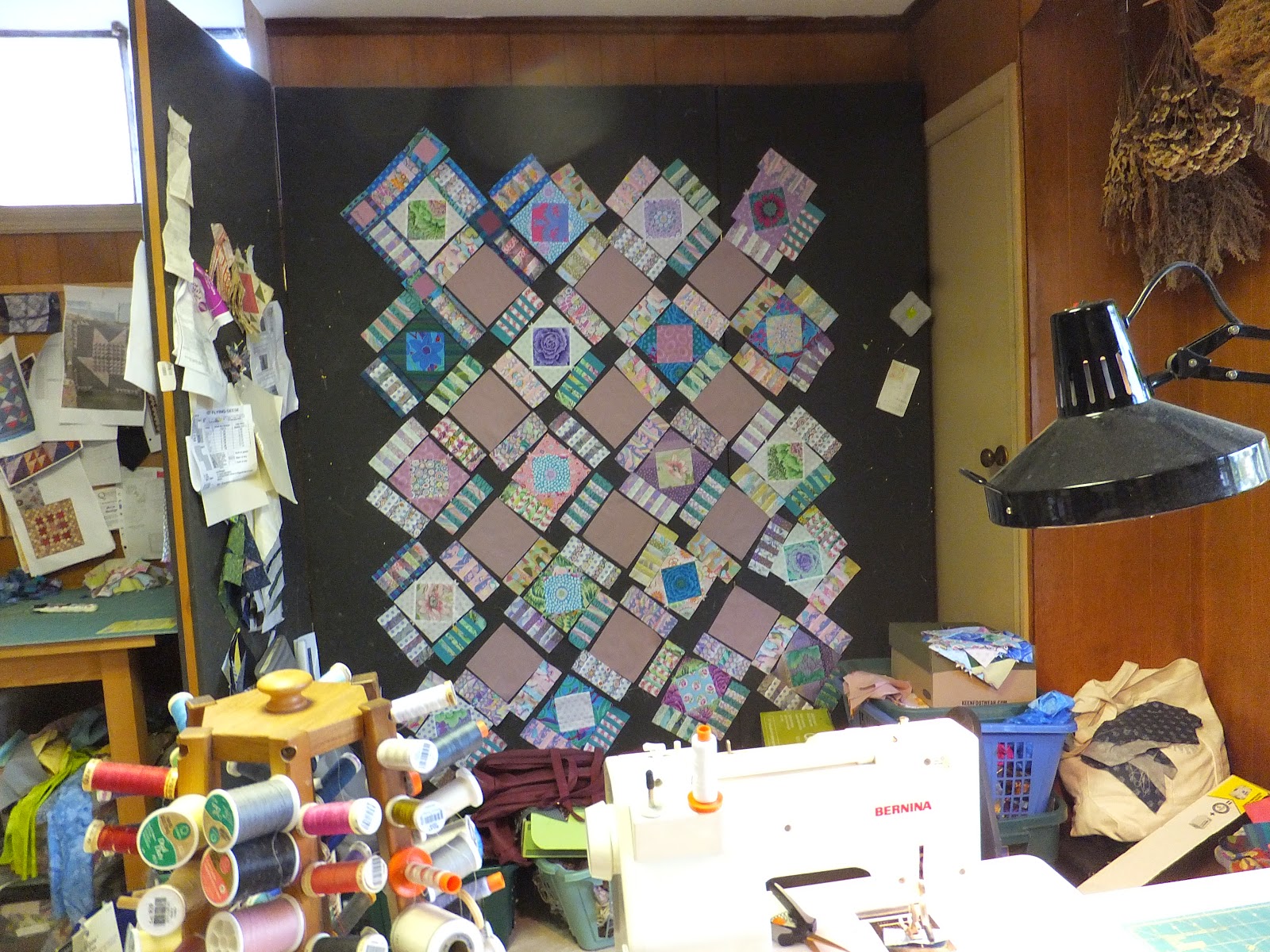 Why yes, thank you, I do still sew. Every day [almost] this past week, in fact, I've put in time "making tracks."

This is The R5, hinted at in a previous post, inspired by Julie's current WIP.

I think that if you are so inclined, you can click on the photo and make it bigger. I tried that initially, but it took up the whole top of the page, so I settled for this size.

Most of the fabrics are Kaffe/Brandon/Phillip. There are some others, designers unknown, but not many.

It's called The R5 after my dear son-in-law's rant about a name change on the regional rails, he not being anywhere old enough to know that long before the route was known as The R5, it was called The Lansdale Local. But I'm not going to burst his bubble. I'm just going to make the quilt.

To my way of thinking, the large square-in-a-square blocks represent the stations, the small bordered squares are considered the junctions, and the ties and rails speak for themselves. Making the ties took a long time; they were pieced from strata and some strata yielded three sections while one actually provided six. Next up will be putting the rails on the ties and trimming those units to 6-1/4", the size of the stations. The junctions, before bordering, are 2-1/2" inches. Haven't begun to cut the setting triangles yet.

I'm having so much fun with this project. No idea when it will be completed, but for sure there's no way it can come off the wall until it is!

Barbara Anne said…
The quilt is going to be wonderful! Love your pattern and fabric choices, too. What fun!

Don't you wonder why occasionally "THEY" decide some landmark, road, or such has to be renamed? I'm still puzzled by that nonsense. Of course, here in Richmond I cross what I still call The Nickel Bridge, I'm using the name I learned from my grandparents - and it has cost more than a nickel to cross that bridge for ever so long!

Quiltdivajulie said…
Your version is wonderful . . . I love that you scaled it down so it could be set on point and your fabrics give it so much life! I'm sure whoever made that vintage quilt we've all responded to would be pretty pleased!
Sunday, October 19, 2014 5:27:00 PM

OTquilter said…
What a fun project. Now if you want to get really serious about transportation quilts, how about a subway map, say, of Tokyo? Take a look: http://www.ohfransson.com/oh_fransson/tokyo-subway-map-quilt-along.html
We all have our obsessions!
(And speaking of renaming, what about renumbering? Since my sister left Pittsburgh, I don't get on the Turnpike very often any more.....I still miss the old exit numbers (My college trip was west from Philly to #16--Carlisle, then down 81 to Chambersburg.)
Sunday, October 19, 2014 5:56:00 PM

Karla said…
Beautiful quilt! I too am having a hard time with the change. I want the R back! I want Market East to be the Reading Terminal and now it is Jefferson! I hate being confused... LOL!
Monday, October 20, 2014 7:31:00 AM

Nann said…
What a great design! And nice to get a glimpse of your studio, too.

Chicago commuter trains are known only by their times, and those depend on the station (of course). The rail service is METRA now, but the tracks themselves are owned by railroad conglomerates. I still call the tracks here the Northwestern, though the Union Pacific bought the Northwestern a long time ago. The downtown terminus is the Ogilvie Transportation Center ("Ogilvie" for short) but I like to call it "once known as the Northwestern station." [After all, Union Station's name is unchanged.]
Monday, October 20, 2014 8:58:00 AM

Anonymous said…
That does look like fun, Nancy! Very spring-like colors, and a design that offers many possibilities. I love the nice squares for showing off quilting designs!

Some more of the blocks from you and your friends have found their way into a top. The rest of that particular one will be a baby quilt by the end of the week, I hope.
Monday, October 20, 2014 6:48:00 PM