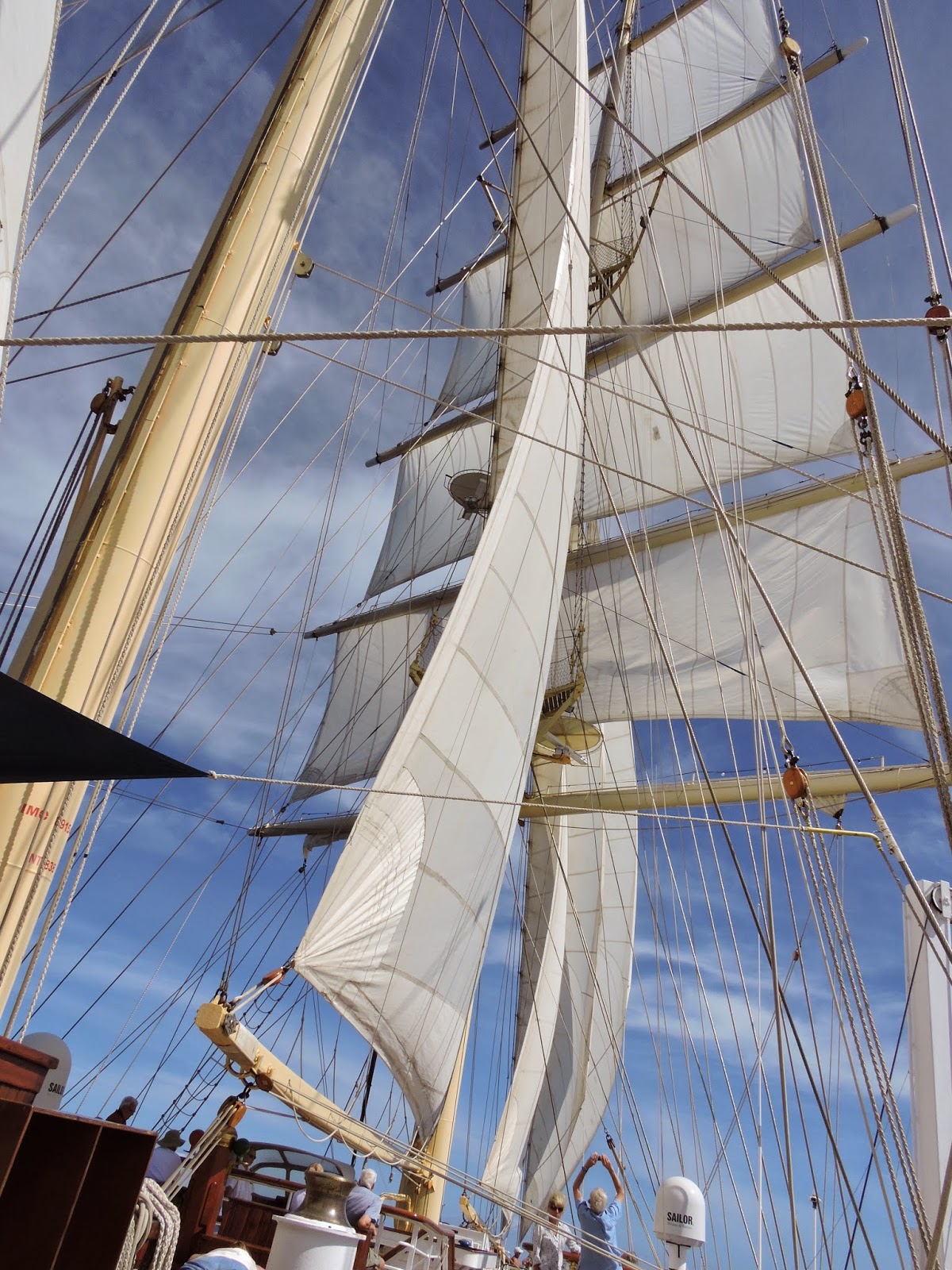 It was about sun, warmth, relaxation, and the sailing experience.

This was our third trip aboard Star Flyer and we quickly fell back into our shipboard habits. For Joe, that meant automatically rising before dawn and being on deck to watch the sun rise. For me, it meant no make-up and watching the sea, trying to figure out what might be on the horizon. For both of us, it meant meeting lovely people, having delectable cuisine, and totally relaxing. Joe's sketchbook filled up quickly as he drew the passing scenery, the crew, the ship.

We came aboard in Montego Bay and the next day pulled into Port Antonio, also in Jamaica. Then there were two days at sea, a stop in the Dominican Republic at Santo Domingo, two more days at sea, stops at Jost Van Dyke and Tortola, and finally coming into St. Maarten.

We never tired of the sailaway experience, when the ship left a port, the sails being raised to beautiful music, often with the sun setting in the background. Every passenger (there were about 100 of us aboard) had his or her favorite spot for sail-away. I was partial to a little bench on the starboard side. 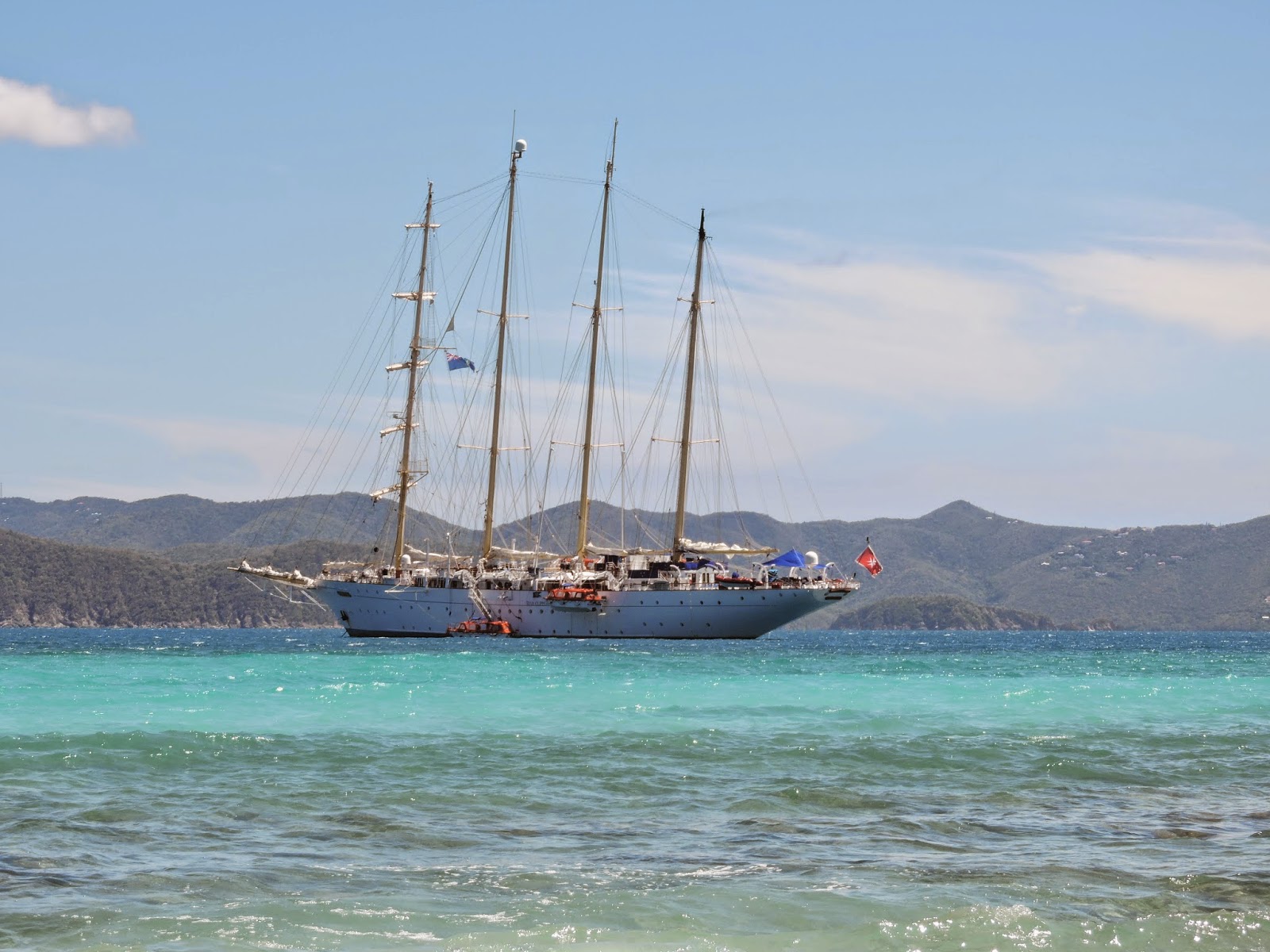 We spent time with some absolutely delightful people. Right now I'm chagrined because the pictures I took with my phone and sent to myself never arrived and must be lost in cyberspace. Otherwise, I'd show you some of them.

Instead, I'll tell you that we met two couples traveling together who enchanted us with their stories of life in a small town in New England, apparently Maine's answer to River City. The men were retired physicians; one of the wives was a superb kazoo player and the other was someone who just liked everybody and always looked on the bright side of everything.

Another couple tugged at our heartstrings; the wife had had a stroke five years earlier and had virtually no short-term memory. She kept very close to her husband, who was devoted to her, and became uneasy if he wasn't around. Instinctively, the women aboard rallied to support her and we were saddened when the trip proved too much for her and they left the cruise early. Joe and I spent a lot of time with a woman traveling alone who was very familiar with Philadelphia and lives Out West; she had a fine mind and winning smile and you should have seen her climb the mast.

Another woman was a bundle of nerves and kept pushing her bangs out of her eyes; she was the one who suggested to the Cruise Director that a book group be formed. So one day eight or nine of us gathered to tell what we were currently reading. Incongruously, I was reading Michener's "Alaska," because we are hoping to travel there soon. The lone man in the book group opined that if we ever to go to Alaska I should take along Michener's "Caribbean."

The book club wit was an odd man, traveling alone, and was not at all reluctant to share that he had over 6000 songs on his iPod, over 1400 books in his home and had a spreadsheet telling what shelf in what room was the right spot for a particular volume. He said he eats spaghetti at 2:00 a.m. most nights and often drives to Disneyland to go on just one ride. I told Joe I thought I knew more details  about Ed than I do about Pat D., whom I've known for about ten years! 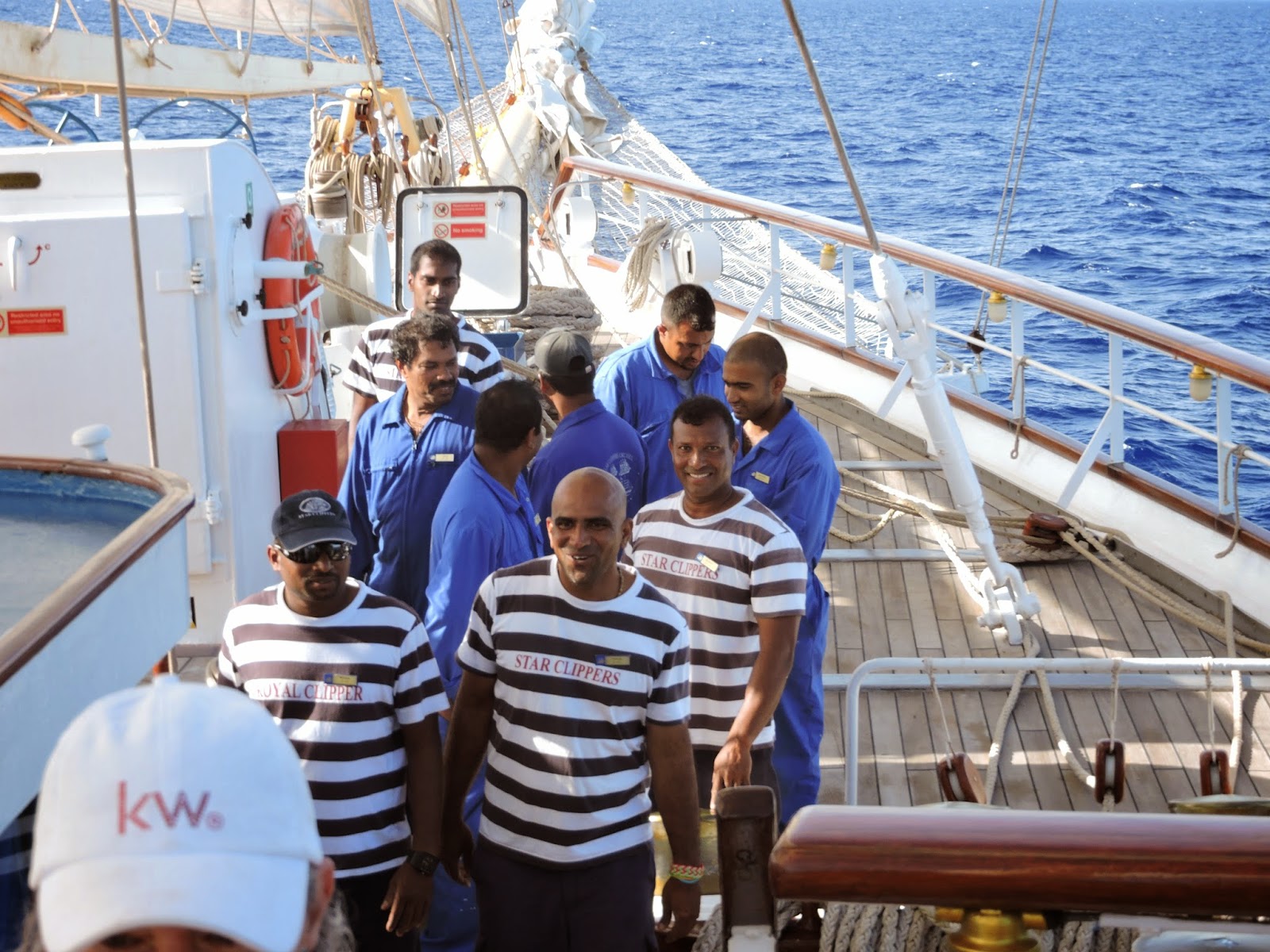 There were approximately 70 crew members aboard, officers and deck hands, cabin stewards, waiters, sailmaker, hotel manager, nurse, cruise director. All of them were so pleasant.

One day I attended a presentation by the hotel manager who detailed the quantity of several kinds of food that had been purchased. He showed us slides of the pantries and of the galley; he explained how each meal was plated and decried the use of microwaves. He showed us where, through a huge opening in the main deck, just above a similar opening in the dining room, both covered by hatches, the food was brought aboard and lowered into the store rooms.

The dining room manager, once he learned of my shellfish allergy, had the ship's nurse (who doubled as a waiter) on hand to advise me whether or not there might be some shrimp lurking in the tempura (there was) or the fried rice (maybe there was, maybe there wasn't). The dining room staff were ever helpful and while they behaved formally at dinner, they didn't hesitate to engage in banter at breakfast. 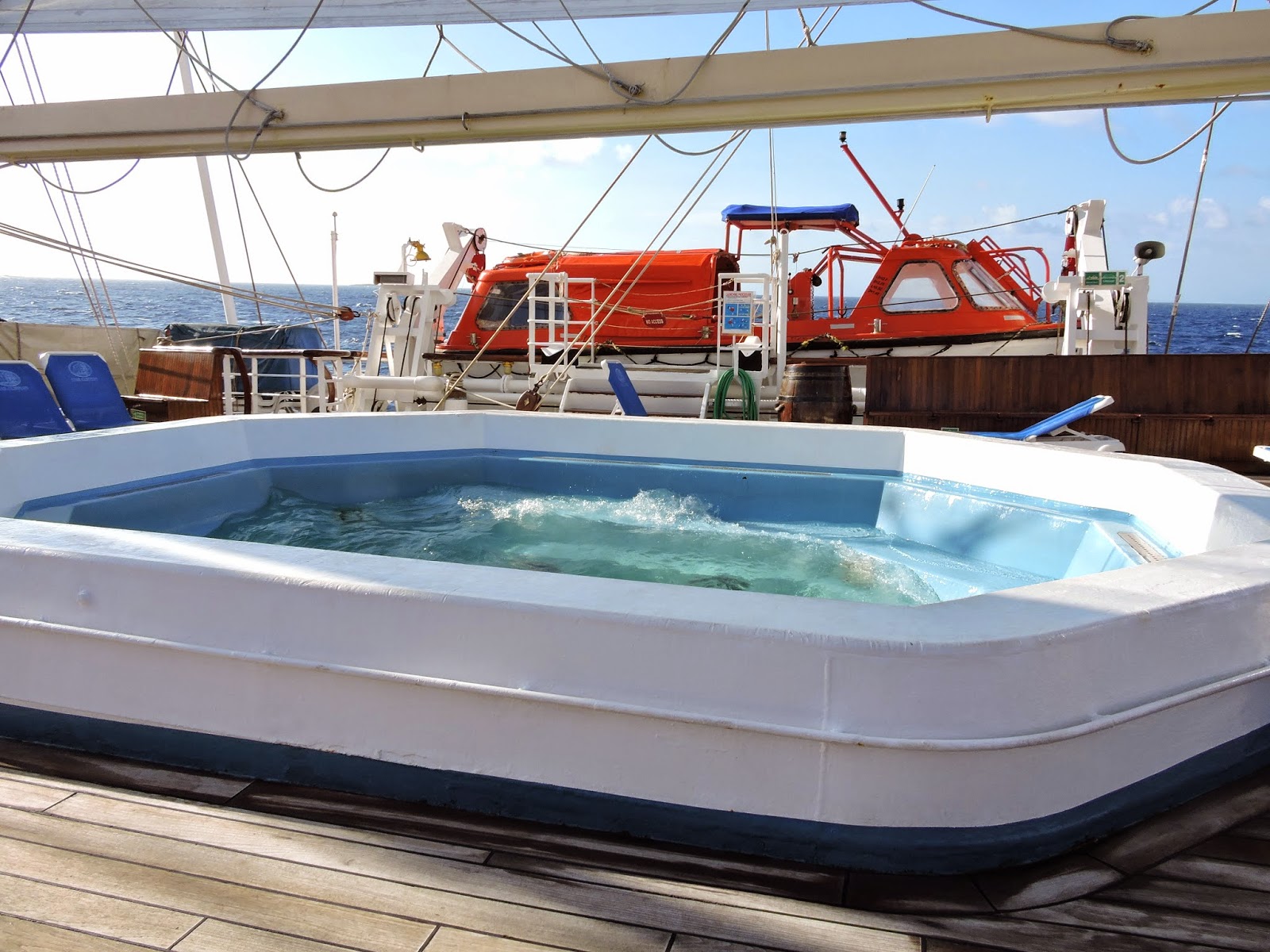 Star Flyer has two small salt water swimming pools that are open when the ship is in port and while at sea if the sea isn't too rough. There are abundant deck chairs, some in the sun and some under a canopy. Back near the stern, on an elevated platform is the Thai masseuse's tent, and there was always someone in there, achieving even more relaxation.

The ship's library is comfortable; the piano bar is a hang-out spot in the daytime but in the late afternoon and evening the ship's musician plays the piano. Beautifully. 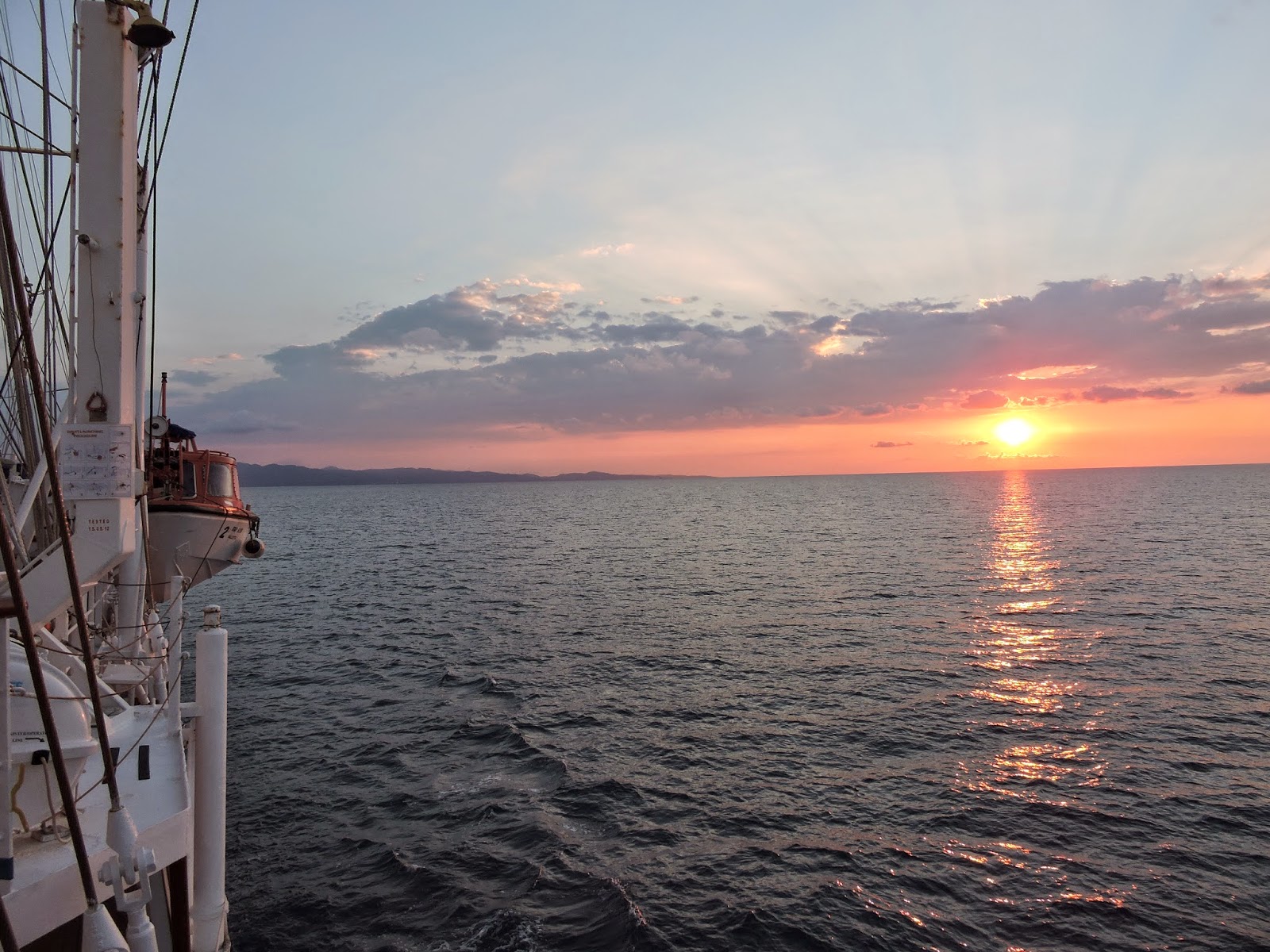 Joe did see all of the sunrises, and I saw most of the sunsets. We marveled at how many shades of blue the water took on. One afternoon a school of porpoises swam and played alongside the ship.

It's not the kind of cruise with Big Name Entertainment. Rather, one night there's a fashion show from the on-board shop, another night is talent night (Ed did some bumbly magic tricks and the Maine quartet played a trio of kazoo selections); the night we were to leave Santo Domingo, a four-piece steel band performed in the tropical bar. Other nights there was music and dancing, but some of us had to go to bed early. After all, sunrise would be coming around very quickly!

Barbara Anne said…
It sounds absolutely perfect in every way. I wonder if a Caribbean quilt of many blues might lurk in your future!