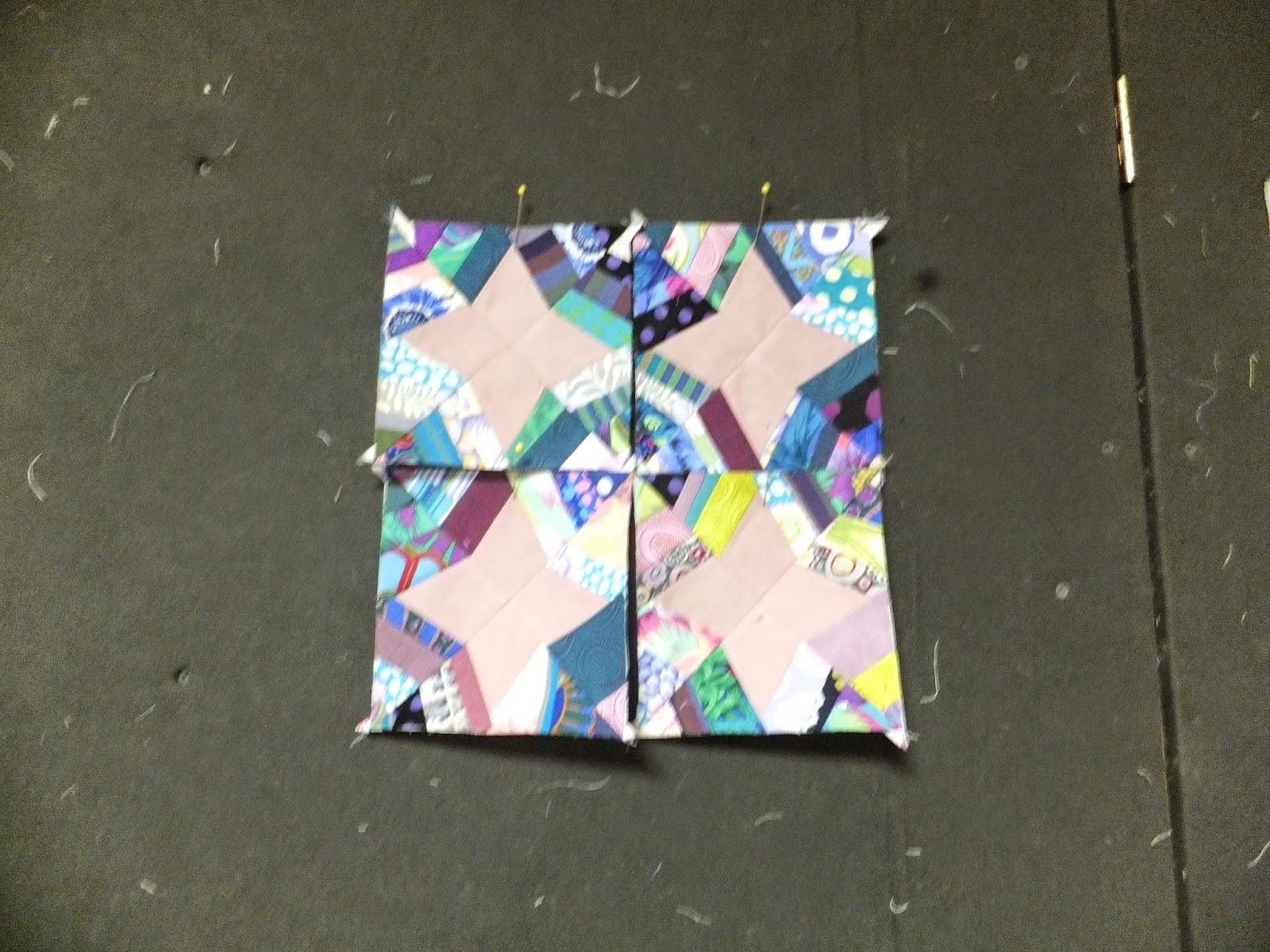 When it was her turn to be Queen Bee, my friend Pat requested that everyone make her two 12" Wacky Web blocks; she provided the  paper foundations and WOW centers and asked for assorted brights for the piecing. She asked us to please remove the paper backing before turning in our blocks. I had never cared much for spiderweb quilts up until then, but making Pat's blocks was a lot of fun; even removing the paper from the backs of these big things was not a problem.

Do I really need to write any more? Surely you are way ahead of me on this post.

When I saw all of the bee blocks for Pat lined up on the table, I was smitten. Her brights on white were striking!

Now, here's where my smittenness impacted my thought process. I didn't think I wanted to make a 12" block spiderweb quilt because I thought it would be a lot of work and I didn't have a plan for it. But I thought I wanted to try it. So I ordered the miniature version template and foundation papers.

Charlotte would throw up her hands (all eight of them) in incredulosity.

I used scraps from my previous quilt. I didn't cut into any "real" fabric other than for the center kites. I stitched and pressed and stitched and pressed. And enjoyed what I was doing. I put the blocks up on the wall so that Himself could see how the webs formed and so I could admire my own progress. It took a while.

I made thirty-six blocks. Enough for a 36" square baby quilt. With more pieces than any even semi-sane person would consider counting.

And then I began peeling off the paper from the back. And have nearly lost my mind in the process. Thirty-six itsy-bitsy blocks (you know, webs for the itsy-bitsy spider?). With minuscule sections of paper.

My particular quilting coterie is fond of saying about regular paper-piecing, "I'd rather give a cat a bath than do that."

I've been working at it for three nights, using the seam ripper to score the lines and the tweezers to pull out the microscopic nubbins of paper.

All of this for a baby quilt.

I already have one quilt named "What Was I Thinking?"

This one, I think, will be called "Some Pig."

Barbara Anne said…
Oh, my goodness. Love your blocks but you have my sympathy in dealing with all of those wee bits of paper.

A long-arm quilter told me not long ago that it's unnecessary to remove the paper piecing paper before quilting. I wonder if the quilt would make crinkling sounds thereafter?

Speaking of "what was I thinking" ... a Lewis and Clark block has more than 60 pieces in it. I made only four and that was enough. Some Pig - HA!

Mrs. Goodneedle said…
I have a quilt with the words "Some Pig" quilted into a spiderweb. I'm certain that as a professional cat coiffeuse you wear your scratches well, like badges of honor. This quilt will be lovely, especially because of its status as a one-and-only! ;)
Friday, May 01, 2015 9:01:00 AM

OT Quilter said…
Ah, THERE they are! Very cute, and I love the name, "Some pig," even though my favorite EB White book is "Trumpet of the Swan." Pulling the paper out is one reason I'm not an avid paper piecer, although I do Emglish paper piecing. Go figure!
Friday, May 01, 2015 9:06:00 AM

Janet O. said…
EB White would be proud. I giggled through this entire post.
You have described my feelings about paper piecing to a "T". Every time I do it I wonder why.
Those little blocks sure are going to make a great baby quilt, though!
Friday, May 01, 2015 1:23:00 PM