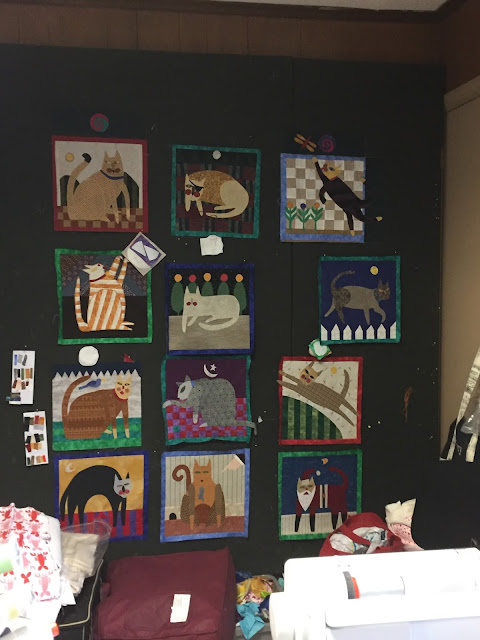 This will be the last cat update for the foreseeable future. As you can see, I completed the bonding of block number eleven using the fabrics I was given. For block number eight, I made the cat gray because I thought there were already plenty of yellow cats. Happily, I found fabrics that I liked in my stash and scraps to make blocks five and six. Block five had planned another checkerboard foreground and I thought we already had enough checkerboards and made it solid. I went into my floss supply (years ago I was a counted threads stitcher) and found all of the colors that I need. Since the photo was taken, I put a red border on block number seven. Last night I embroidered whiskers on three of the blocks that were otherwise finished. Each of the seven bonded-but-unembroidered blocks is in its own ziplock bag with the correct flosses.

Since the whole idea in resurrecting this ancient project is to have something portable for planned travel, it feels very good to have everything all organized and ready.

If I ever get all of the blocks completed, I'll check in again, I think, before assembling the whole thing. Meanwhile, Meow!

Janet O. said…
It does feel good to have something ready to grab when you need handwork.
I think it also feels good to free yourself from a demanding pattern and finish a project your own way, rather than let it sit in a closet because it expects too much of you.
Thursday, March 09, 2017 4:33:00 PM

Quiltdivajulie said…
Good for you for making changes to update this so it suits you now. And how grand that the updates came from your stashed supplies! Even better. Happy stitching (may you purr your way through these)
Friday, March 10, 2017 8:59:00 AM

Barbara Anne said…
Well done in getting the blocks finished and ready to travel.

I, too, have my aged DMC embroidery floss from my cross stitch days, each in it's letter-size envelope, labeled with the number and floss color name from the DMC chart.