Blogging has slowed as subject matter is far from plentiful at present. But we did have one big news story this week.

Himself and Blackberry (ten years old today!) take a very late night walk on the neighborhood streets, and have occasionally seen the fox scampering about in people's yards. This isn't really surprising because at the end of our block there is a wonderful heavily-wooded park where there reside at least a dozen deer. So wildlife is to be expected. A few weeks ago we saw the fox curled up in our side yard right after we'd gotten up.

Their morning walk is different. They go into the forest and usually at breakfast report on the number of deer that they'd seen. One morning early this past week, there was a report of a suspicious-looking burrow in the forest. It might be a den, they thought. A couple of mornings later, they went closer and there were two very small inhabitants, one of which was as curious about them as they were about it!

So it seems we have more than ONE adult fox in our neighborhood! 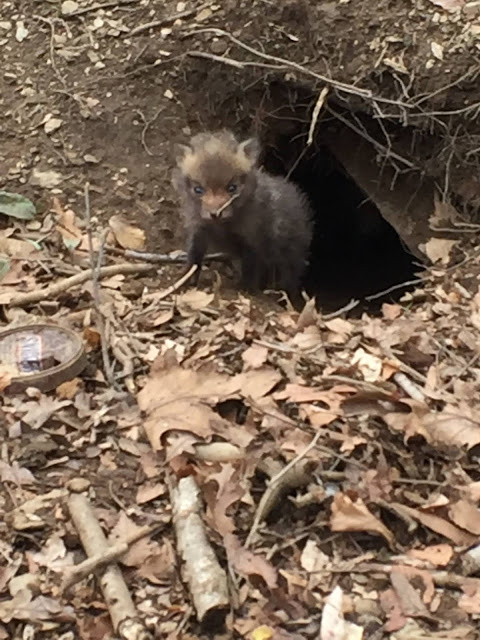 Quayquilter said…
We have foxes around and about too. I see one cross the bottom of the garden quite often and last year would look out to see three cubs playing. I don't encourage or discourage the just live alongside. Thank you for recommending Unorthodox, It was fascinating. I went to school with many Jewish girls - I noted Leah in the series came from Manchester - but obviously more liberal.
Saturday, April 11, 2020 4:01:00 AM

Barbara Anne said…
Wonderful photo! We, too, live in a wooded area, off the beaten path in Chesterfield Co., and have seen deer, badgers, raccoons, foxes, evidence of a mountain lion (yikes!), and all manner of raptors. It's quite amazing to have wild nature outside the door.