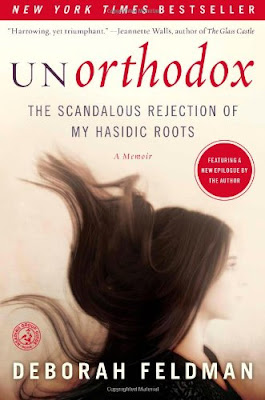 I had read the book a couple of years ago, shortly after publication, so I was curious when I learned that Netflix had produced a mini-series based on Deborah Feldman's story.

Esty, the main character in the mini-series, is a member of the Satmar community of Hasidic Jews in Williamsburg, Brooklyn, New York. I've been mildly curious about and fascinated by this exotic culture, so unlike my own. So I was happy that I had the time this week to watch the entire series.

Make no mistake, the mini-series is in the spirit of Deborah's story; it is not her story. It was one of those rare occasions when I got more out of the "movie" than I did from the book. It is so well done, and Shira Haas, who plays Esty, gives a very moving performance.

I've thought about the story since watching it. It doesn't seem to want to leave me.

Here are some of the thoughts:

I don't feel like I am finished, but this will have to do. I recommend the mini-series. It is four episodes. Four heartbreaking episodes. But so well done.

Mrs. Goodneedle said…
I will check it out. Right now I'm not sure I'm up for HEARTBREAKING; but I take your recommendation and remember it as a good one. Currrently, I am thoroughly enjoying Call The Midwife-- thanks for that tip! :)
Saturday, April 04, 2020 1:34:00 PM

Carol said…
Just finished the series last night on your recommendations. What an amazing story! Loved the character Esty. I also watched the piece at the end on making of the series. That was enlightening as well. It is all so foreign to how I was raised, as well as my beliefs. This one will stay with me a long time. I enjoyed reading your thoughts on the series. Not sure I could read the book now.
Saturday, April 18, 2020 2:20:00 PM