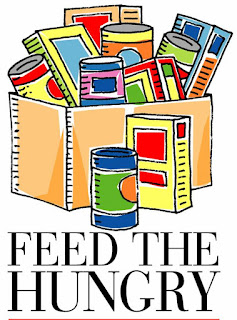 For the past several months, I've spent my Thursday mornings volunteering at the inter-faith food pantry that serves our county, Near Philadelphia. The Thursday morning team functions like a well-oiled machine. Claire and I spend most of our time outside. She does the job I really don't want to do: She interviews the clients as they pull up, gathering the information we need in order to serve them. I man the donation table; as the cars pull up, I fill out a form and take the donations inside where Sandra and Arlene weigh them and check for dates. I also run the carts, delivering a full order of six to seven full bags to each family. Pat helps with that, too, once she and Nora have finished filling the bags of cold things. Deb, the paid employee, processes paperwork, coordinates government deliveries, devises systems, and helps with any task that seems to be falling behind. Most Thursdays we serve about 25 families, though we've had weeks where there were twice that many. And the pantry is open for clients three other times during the week. So there are a lot of hungry people out there.

During the weekend prior to MLK Day, our local government officials sponsored a massive food drive in our township, to be delivered today. The local elementary schools also ran food drives, as did our township's big retirement community. And then there were the individual and church donations. The Pantry isn't open for donations on Monday mornings ordinarily, but in the face of all this giving, extra hours were scheduled. Knowing this special event was coming, I offered to come in for an extra shift this week.

What a morning it was! The outpouring was overwhelming. Fortunately, Deb had scheduled all kinds of extra volunteers for weighing and date checking. The retirement community sent two full carloads full and  the Presbyterian church four. There were six from the government officials, and two or three from the elementary PTA. Outside with me were some of the government folks: the president of the township commissioners, a tireless guy who works in the office of our Congresswoman, and -- to my delight -- out local state representative who grew up with my older son and remembered playing in our back yard. These men unloaded trunks, filled carts, hauled groceries inside, bantering with each other all the while. It was about 39 degrees the whole time and even though I've been home more than two hours now, I'm still feeling bone chilled. Bone-chilled, yes, but heart-warmed at the same time.

It wasn't until we were nearly finished that it occurred to me to take some pictures. It was definitely a morning to remember.