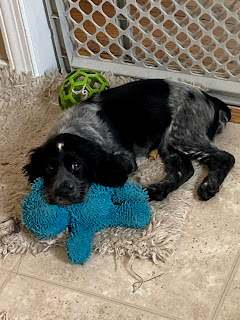 They started Puppy School this week, the Love of My Life and the Dog of the House. They were both a little bit nervous because there would be nine other dogs and owners present, and Lizzy's not been up close and personal with more than three other dogs. The dogs in the class would be new and different, some bigger, and some with breed names that can give one pause. But the other reason for going to puppy school -- apart from learning basic obedience training -- is to be socialized around Other Dogs. Dogs that may be very different, that may have intimidating statures, that may be loud and blustery. To learn how to live in the world with these individuals.

Dog owners in a neighborhood know who each other are. They may not be personally acquainted, may never have had a conversation because of the need to keep moving and avoid confrontation. But we all know the Lady with the Goldendoodle, the Guy with the Pointer, that Fellow with the Three Tangled Leashes. We sometimes wave, smile, or call "good morning," but we keep moving because we don't know what might happen if our animals get up close and personal. Sniffing could lead to growling and nipping and biting or even be by-passed altogether in favor of aggression.

Not long ago, we were out front, all three of us. Lizzy had made the requested puddle and was being praised. Lavishly. And down the sidewalk came the Man with the Old Golden. He paused. Lizzy hid behind one of us and the Golden sat placidly. The Man admired our puppy. We chatted just a bit. He sympathized with the loss of Blackberry. Lizzy poked her head out and considered approaching the Golden. The conversation ended and they walked on.

As we headed into the house, I remarked to Joe, "I've never met him before. What a nice man!"

"Nance," he replied. "That's the guy with the big Trump banner on his house."

I've heard a lot of bad things about Pit Bulls. So I tend to steer very clear of them. But a sweet friend has adopted one, and he's really a very nice animal when I got to know him.

A lot to think about right now.

Unknown said…
Maybe sweet to your face but he left that HUGE BANNER up waiting for the election to be over turned. It was still up on Wednesday. I will never be able to walk past that house without thinking how horrible they are.Just my 2 cents.
Saturday, January 09, 2021 11:50:00 AM

Barbara Anne said…
Wishing Lizzy well in Puppy School as there is lots to learn!

Our next door neighbors still have their Trump flag up, but we feed their cats when they're away, she brought us cookies at Christmas, and I made them an "American Tea Cake" (recipe from a UK blog) for Christmas. Nice people.

Mrs. Goodneedle said…
Being socialized is such a good thing to happen. I remember when Hannes was a puppy, the same age as Lizzy, and I was fearful for all of the same reasons when he began Puppy School. It was so good for him and he went on, eventually, to complete and excel in Obedience 1 and 2 and then received his Canine Good Citizenship. He developed confidence and held his own against the bully Corgi in class (he would simply glare and walk away). I've always looked back on those classes as such a great investment. Oh, BTW, our son and family have two Pit Bull mixes. They're intimidating at first sight but are the sweetest and most loving and lovable pooches. There is much to think about here, as you say, but I have deep faith and count on it to propel me above the fear. God is great, people are good. Hugs~
Saturday, January 09, 2021 3:23:00 PM

Quayquilter said…
I'm in the UK and following events in the US closely. I have been listening to excerpts from Obama's memoir in which he said how gracious the Bushes were and did everything they could to ensure a smooth transition and he resolved to do the same for his successor which he did.
The compliment was not passed forward though. I am also listening to he BBC Americast podcast in which they regularly talk to a Trump voter from Texas. He was as disgusted as anyone by the antics in the Capitol saying that if the voting system was amiss it should be corrected by legislation not riots. I suspect a lot of Trump voters do not admire the man or his behaviour but feel that his policies may benefit them personally. I read in a newspaper that increases in low paid jobs had gone up five times more under Trump for instance - of course there was a Republican majority so it has been easier for him to get things through. I hope the new administration addresses the issues that caused Trump to be elected in the first place and still cause him to command huge support.
During the Brexit campaign there was the tendency to demonise the out voters as bad, racist and ignorant people, a mistake I feel. It's better to listen.
Sunday, January 10, 2021 4:21:00 AM

Quiltdivajulie said…
We have a neighbor who had not one, not two, not three, but FOUR huge DJT banners and flags during the election season. He's a single dad with a young daughter - while we do not agree with his politics (nor his method of displaying them so prominently), he's a decent neighbor. There are several in our neighborhood who had signs as well - also good people. As you say, much to think about on "both sides of the aisle". Best wishes with puppy school - such a worthwhile investment in time and energy. Lizzie is a sweetie.
Sunday, January 10, 2021 10:56:00 AM