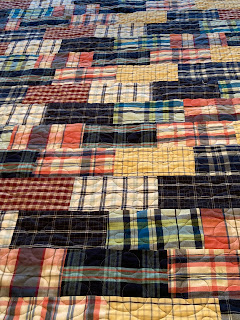 I'd seen memory quilts, of course, on the internet, in blogs, at guild meetings. I'd seen plenty of them, but I'd never made one. I'd never been asked to make one.

Then Bill died. His daughter, Tanya, is a good friend of my daughter. He and Tanya had always been close, and after his wife died a couple of years ago, they became even closer. Tanya's an only child and has never been married.

I followed Tanya's Facebook posts during the year following his death. She was struggling. There was so much to do, so many things to find homes for, and so much sadness.

So I offered. And she accepted.

The weather yesterday was unfit for photographing the quilt, so I did it inside. Sherry will be seeing her this month. I hope she likes it. 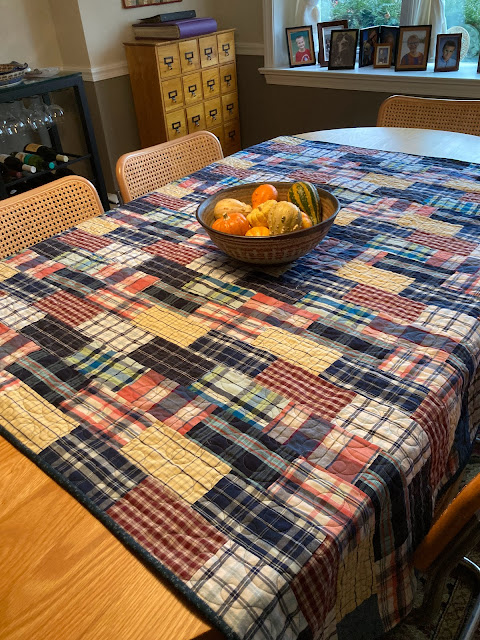 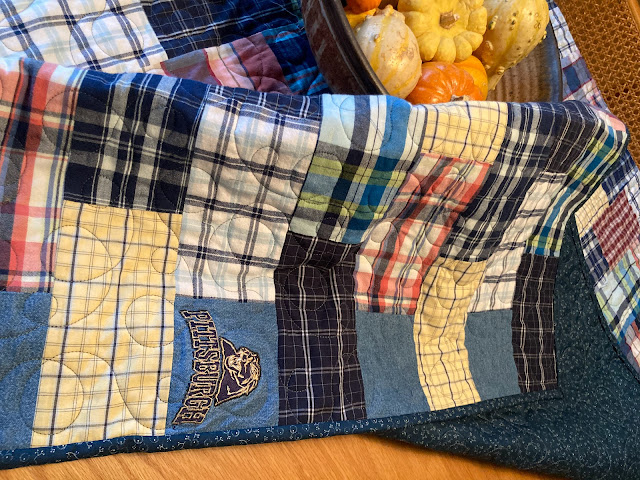 Barbara Anne said…
What a kind offer you made and what a wonderful comfort quilt you created for Tanya. I hope she snuggles with it for decades to come.
Love the pattern, too.

I think that too often we seasoned quiltmakers think we have to knock ourselves out with an elaborate design for a comfort quilt. We don't. These bricks show off the shirts (with the Pgh pop!) perfectly.
Thursday, December 01, 2022 3:33:00 PM

Anonymous said…
That's a wonderful quilt. So many times, when making a quilt from plaids, not all plaids are suitable. Some plaids are too big or color not right, but with this pattern, all work. You did a fantastic job. Thanks for sharing.
Thursday, December 01, 2022 5:40:00 PM

Shasta Matova said…
That is a beautiful quilt, and such a wonderful tribute to her father. Tanya is sure to love it.
Thursday, December 01, 2022 9:20:00 PM

Janet O. said…
Wow, Nancy! I think that is a glorious use of Bill's shirts. So very thoughtful of you, and I hope it helps bring her some healing.
Years ago a friend's husband died very unexpectedly. I offered then to make her a memory quilt from his shirts, and she has still not been able to bring herself to go through his closet. It can be a tough thing.
Friday, December 02, 2022 12:29:00 PM

Quiltdivajulie said…
You did a masterful job with the plaids - and like the others mentioned, the large bricks were the ideal way to go. Memory quilts are challenging - for the one grieving and for the one making. You nailed it.
Friday, December 02, 2022 8:48:00 PM

Mystic Quilter said…
Great memory quilt, lovely plaids and the design is perfect, not too fussy.
I do like the last sentence in the comment from Julie, she is so right.
Saturday, December 03, 2022 11:14:00 PM

Judi said…
What a typically generous thing for you to do! I am sure Tanya will love it and be comforted by it.

As others have said, the pattern was perfectly chosen to showcase the plaids. Great job!
Wednesday, December 07, 2022 8:20:00 AM