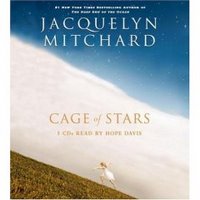 Haven't done a book review here lately. It's maybe time. My system for getting book recommendations is through Amazon. They recommend books based on my ratings of previous books. I get the books from the library and read them. I rate them. Amazon recommends more. It is a never ending supply of recommendations and it is free!
. . . .
Cage of Stars had been on my recommendations list for a long time before I went for it. Once I got it, I sailed right through it. It is an easy read. This is not to say it is a fluffy read. The book deals with some very important questions about reconciliation, forgiveness, retribution, family influence, religious doctrine and choices. One of the things I liked about it was that it allowed for a person to not know why she had done something. Because sometimes that is how it is.
. . . .
The weakness in this book is the number of coincidences which are explained by an Asian philosophy about things being connected by a red thread. The last link of that red thread was a stretch for me, but I'm used to working with cotton thread, not elastic . . . .
. . . .
In the opening pages of the book, Ronnie's sisters are murdered by a madman. The rest of the book is about her coming to terms with this. Interestingly,the doctrine of Ronnie's religion, the Church of the Latter Day Saints, plays an important part. I don't know that I've ever read a novel where there were Mormon characters or, better said, where it was important that the characters were Mormons. I learned a few very positive things about a faith tradition that mainstream Protestant denominations regard with suspicion at best, and often with disdain.
. . . .
Cage of Stars held my interest all the way through. At times it caused a lump to form in my throat. I would give it a B. Maybe a B+.

Laurie said…
I'm considering reading this book, but have wondered if it would be too depressing. I finally read "Deep End of the Ocean" years after Oprah recommended it and found it so true to how real people would react in that situation. No, most of us wouldn't be heroic! And I also loved "The Most Wanted." I hated the one where she marries the younger man -- it felt contrived -- and haven't read anything of hers since. But I may have to pick this one up.

P.S. I like your blog. I hit a couple of "Next Blog" blogs yesterday and found several boring ones and one hysterically funny one that's been added to my favorites.
Monday, September 25, 2006 12:11:00 PM

Anonymous said…
An invisible red thread connects those who are destined to meet, regardless of time, place, or circumstance.

The thread may stretch or tangle, but will never break.

Susan Tidwell said…
Thanks for visiting my little part of cyberspace! Nice to meetcha.

I too use Amazone book recommendations. I suppose they think we will buy the books recommended, but we know where to get them for free, right?
Thursday, September 28, 2006 7:13:00 AM