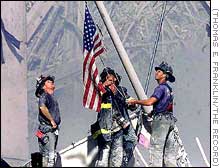 It has been five years now, and many more lives have been so senselessly lost. That, however, it not what I want to focus on today. Instead, I want to raise a message of hope. I work at a Quaker school. On the first anniversary of September 11, I wrote the following piece:
. . . .
On 9-11, the Sixth Grade opted to hold MFW in a circle on the front lawn, gathering around the peace flag. I knew I didn't have an hour to go with Upper School, so I went out and joined Sixth. This was my first experience at MFW with other than 9-12th grades.
. . . .
Two of the faculty spoke, as did about a dozen kids. They were all articulate and sensitive, sharing messages of sadness and of the need to “move on.” Some mentioned an increased awareness of the importance of being kind.
. . . .
One little girl in a rose-colored top spoke so earnestly. She said that today was her birthday and while it did not seem right to celebrate, a part of her wanted to celebrate, for she was thankful to be alive. She spoke with this amazing maturity, indicating that she believed that over time she would become used to having this infamous birthday. But today it was hard.
. . . .
After the rise of the Meeting, I went over to find her. I told her today was my son's birthday, too, and that he lived in New York City. Her eyes became very wide. I told her that I couldn't hug him on his birthday, and I hadn't been able to hug him on his birthday LAST year, when both of us really needed to hug. I asked her if she would consider letting me hug her for her birthday. She didn't hesitate for a minute. She opened her heart, she opened her arms, and we had this wonderful long tight hug. We don't even know each other's names. I came back to my desk with very wet eyes.
. . . .
Thinking of Tom, and my old friends Brenda, Fran, Paul, and Woody's Mom and the 6th grade girl in the rose-colored top, and what a mixed up day this is for them, the 9-11 birthday people. And celebrating their being alive and serving as a real, tactile reminder that life goes on.
Email Post