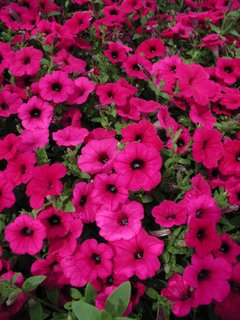 On July 4, Honna brought me a basket of petunias. We put them on the railing of the deck, and I can see them from my seat at breakfast and dinner. These petunias are a bright pink that was unfamiliar to me. I tend to think of petunias as deep purple or white or even a pale, dusty pink. These pretty flowers have greeted me each morning, all summer long. And there is something spunky and audacious about their color.
. . . .
Coincidentally, I have a friend whom -- for reasons that have long since become irrelevant -- I call Petunia. No one else calls her that. Just me. I met her a couple of years ago when she was going through the hardest time she will ever go through. She was a new widow, a young widow. A misfit in her peer group of young-ish families, a misfit in the world of widows.
. . . .
We became close rather quickly and before she had really begun to attempt to deal with her new status in life, while she was still in the deepest throes of grief, she began to be hit by additional hardships, one after another. It was as if she were wading in the ocean and was knocked over by a big wave and as she struggled to get to her feet another wave would come and knock her down again. And again.
. . . .
I became so fond of this woman, Petunia. I've come to admire her so much: her sensitivity to her children's needs when she might well have been oblivious to them out of her own neediness, her clear thinking at times when she might well have a clouded mind, her ability to process what goes on around her, and her reciprocity -- in spite of all that she has been through, she's unwilling to have our relationship be one-way; she always wants to know what is going on in my world. And she remembers.
. . . .
She's doing well now. Has made some changes in her life that needed to be made, has begun to reach out and explore the possibility of a new relationship, has her kids on a more-than-even keel. It has been a privilege to journey with her, a gift to have been allowed to be a part of her life during this difficult time. I've learned so much from her.
. . . .
The weather here Near Philadelphia has been nasty for the past couple of days. Intense rain, heavy winds, power outages in some sections. The evidence is visible when we step outside -- a bazillion twigs, branches, even limbs clutter the yard, and there are those clumps of leaves that form in the gutter at these times, impeding the passage of the water down to the drains. This morning at breakfast I looked out at that basket of petunias that Honna had brought here. They looked terrible. Defeated, scraggly, limp, heads down. I said to Joe, "Looks like those petunias are about done." "No," he responded. "They'll come back. They just need a few days in the sun and they'll be fine."
. . . .
And it made me think of Petunia and -- it turns out -- what a good nickname I gave her way back when.
Email Post
Labels: Friendship Thinking

Susan said…
What lovely flowers, and what a beautiful story, Nancy. There always seems to be a moral in your stories. =) She gave you a *really big* basket of petunias.
Sunday, September 03, 2006 2:20:00 PM