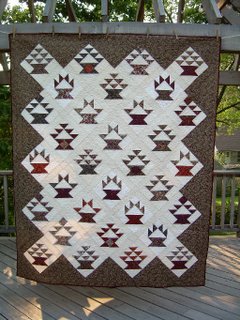 I made this quilt out of blocks I received from a row robin project organized by one of my on-line quilting groups. Each participant chose some fabric and set some parameters for the blocks and made a half dozen blocks and then sent the fabric and rules to the next participant. Each month I received a different participant's project to work on. I'd never been in a row robin before.
. . . .
I had collected a lot of different fabrics designed by William Morris. I pulled out all of the ones that had red in them, and made an 8" basket block with a muslin background. Actually, I made six different ones. Then I sent everything to the next person on the list and requested that she do the same, using a different basket pattern.
. . . .
It took about six months or so before my package of baskets found its way back to me. I was just delighted with the results. Kathy's daughter, Jaime, is getting married this winter and when I asked Kathy what Jaime's taste was, she said, "Oh, you know. Pottery Barn kind of thing." I thought William Morris was sort of Pottery Barnish and was tickled to find I had enough of another of his prints to make the border. I sent the finished top off to Kat to quilt back in April. I was delighted to have Jaime's wedding gift under control already, especially since the wedding isn't until February!
. . . . 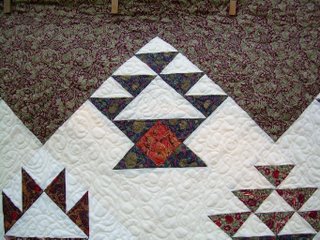 Alas, I was mistaken. In July I visited Kat and picked up the three quilts she'd quilted for me. I took one look at William Morris and knew Jaime couldn't have it. Kat had worked such magic in the quilting of it that I wanted to keep it for myself. It would look so perfect in my living room with my William Morris rug. But what about Jaime? This had never happened to me before, deciding to keep for myself a quilt I'd planned for someone else. I decided to put the binding on the quilt and figure out what to do.
. . . .
It is bound now, and ready for snuggling this winter. I still love it too much to give it away. And the green William Morris fabric is on its way to becoming a wedding gift for Jaime. I'm just not going to let Kat anywhere near it.
Email Post
Labels: Baskets Quilts William Morris

Unknown said…
I'm so glad you linked back to your WM Baskets quilt. It is stunning in its simplicity and beauty. LOVE IT!
Thursday, February 07, 2008 4:33:00 PM

Nicole said…
You rocked this one! Don't baskets just save the day when you aren't sure how to use a fabric group? After I use my William Morris fabrics for Kitchen Sink, I will still have a tub full left over, and those baskets are calling my name.
Tuesday, April 06, 2010 10:01:00 AM