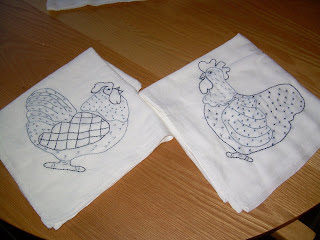 I have two dear, close girlfriends who both like chickens. Well, actually, all of the Good Guys like chickens, but Carol and Elaine are my particularly close friends from that group, ones I generally have a Christmas gift for. This year I found some great big, oversized linen dish towels with enormous chickens stamped on them to embroider. And so I did.

Carol's kitchen has blue in it, so I embroidered her two chicken towels in two shades of blue. It was amazing how quickly the project was completed. 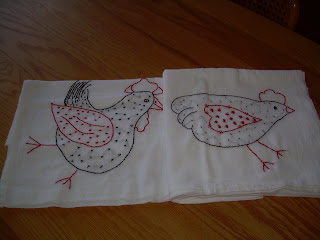 Elaine has a little weekend place down in Chestertown, Maryland, and her kitchen motif is roosters. Over the years I've provided her with some rooster pottery to use there, and this year I decided she should have a couple of the towels, too. I embroidered Elaine's in red and black.

I gave Carol hers on Christmas Eve, but haven't seen Elaine yet. That will happen on January 2, when three couples get together for dinner and a celebration of Carol's birthday. 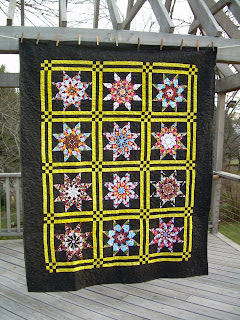 The Stack and Whack quilt that I made and Kat quilted for me can at last be revealed! Andrew has a passion for pirates and about a year ago when a couple of manufacturers came out with new lines of pirate fabric, I couldn't resist.

I bought the fabric up at Heartbeat Quilts in Hyannis in August and started working soon after that. I thought it turned out well, and I really like the quilting that Kat did.

Andrew was quite surprised and he also seemed pleased. Amy told me that the quilt I had made for him when he was a little boy had begun to show wear and had been retired from use, so she believed he was happy to have the new one. 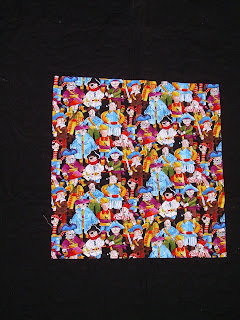 This is the pirate fabric that I cut up to make the diamonds for the kaleidescope blocks.

My belief is that if you click on it you can enlarge it so that you can see how cute it actually is!
Email Post
Labels: Quilts Sewing