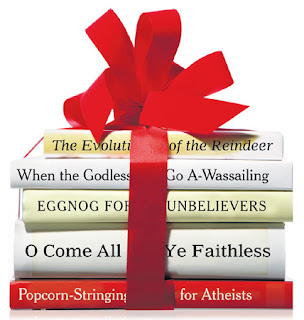 Some people we know have caused me to ponder, to wonder about something. They aren't Christians; they are very clear about that. They don't attend church and their children were not baptized. So there is consistency, and I applaud that. Neither are they Jewish, nor Muslim, nor Wiccan, Hindu, Sikh, Baha'i or any other form of religion.

During the years that I was in seminary, they were visibly uncomfortable when we got together, as though they thought I might engage in prosletyzing. They never inquired about my studies and changed the subject whenever I spoke about what I was up to. Church, religion of any kind, is something they want no part of. Again, consistency.

We've exchanged Christmas gifts with them for some time and have always felt that they put a lot of thought into the gifts they chose for us.

They've announced, however, that they will no longer be giving us Christmas gifts. The reason? "We want to take the commercialism out of Christmas."

So what remains? I mean, if there is no theological underpinning to the holiday (which I completely understand), and the giving and receiving of gifts is ended, what is Christmas about for them? Take the Christ child out of Christmas. Take away the consumerism. What's left?
Email Post
Labels: Thinking

Juliann in WA said…
Ah yes - another mystery. I am all for taking the commercialism out of Christmas but that is because I would rather focus on the true gift of the season.
Saturday, December 22, 2007 1:32:00 PM

Quiltgranny said…
As always, my trust NYTimes is right on target with what you and I are thinking. Here's a little excerpt from something from the "Well" section that I think is so meaningful: Indeed, psychologists say it is often the giver, rather than the recipient, who reaps the biggest psychological gains from a gift. Frustrated by crowds, traffic and commercialism, people can be tempted at this time of year to opt out of gift giving altogether. A 2005 survey showed that four out of five Americans think the holidays are too materialistic, according to the Center for a New American Dream, which promotes responsible consumption.

But while it’s reasonable to cut back on spending during the holidays, psychologists say that banning the gift exchange with loved ones is not the best solution. People who refuse to accept or exchange gifts during the holidays, these experts say, may be missing out on an important connection with family and friends.

“That doesn’t do a service to the relationship,” said Ellen J. Langer, a Harvard psychology professor. “If I don’t let you give me a gift, then I’m not encouraging you to think about me and think about things I like. I am preventing you from experiencing the joy of engaging in all those activities. You do people a disservice by not giving them the gift of giving.”Do your friends are actually missing out on the actual meaning of "gifting". Too bad....
Saturday, December 22, 2007 2:29:00 PM

floribunda said…
Nancy, you are always provocative -- keep it up! And, where can I find a couple of those books to read? Amazon doesn't seem to have "Popcorn Stringing for Atheists" in stock...
Sunday, December 23, 2007 1:45:00 AM

Susan said…
Excellent question, though my first question was why they were ever exchanging gifts, if they didn't believe in Christ.
Sunday, December 23, 2007 2:20:00 AM

Guenveur in Kent said…
Well, it could hark back to the Winter Solstice celebrations of the Druids, or whoever the prehistoric folks were who built bonfires on the hill tops and exchanged twigs or bones. Gift giving seems to be a human thing, although I seem to recall chimps doing somethng of the sort. And dogs and cats bring us things occasionallty, even when it's not Christmas.
Sunday, December 23, 2007 4:51:00 PM

I fall into the non-religous-but-into-Christmas camp. There's a warm fuzzy feeling I get from popping in my Johnny Mathis Christmas album (it ain't Christmas without Johnny in my family) and hanging out with loved ones. Something about the cool weather, the really short amount of daylight, the smell of pine.

But I'm probably a bad person to answer this question, because although I'm an athiest, I really like going to church. It's all very confusing.

Oh, and I get the taking the commercialism out of Christmas. My solution? I just made all of my gifts this year. So there is something about the giving and receiving...you don't have to go commercial to participate.
Sunday, December 23, 2007 9:40:00 PM

debijeanm said…
Once a year I have societal permission to turn my back on my responsibilities (to an extent) and focus on those I love. I get to bake or make or buy something that I think will make them happy, even if just for a moment. At their best, my gifts will bring a smile for the rest of the year. I don't need religion to enjoy that.

But to say that you are not taking advantage of this opportunity in order to take the consumerism out of the season seems a bit disingenuous. I guess I'd wait to see if, some other time during the year, these friends make the effort to present you with just the right token of their affection.
Sunday, December 23, 2007 10:19:00 PM

Anonymous said…
Last night, Christmas Eve, we went to candlelight services at the Kent Unitarian-Universalist Church (known to me as the Church of Misfit Toys). It's always a lovely service and the homily addressed your concern. I talked with the minister afterwards and she said there will be a copy of it on the church's web site next week. I shall sent it to you.
Tuesday, December 25, 2007 6:53:00 PM

Greg said…
Finding the balance. For me, time spent together with loved ones - good, quality time without having really anything to do or anywhere to be - is the greatest gift. I was initially going to NOT buy gifts this year, but as the 25th came closer, I ended up buying for those closest to me, but still didn't buy to the extent I have in the past. On the day of Christmas, I was glad I had bought those gifts. But, still, the greatest gift GIVEN to me was the "slow, relaxed" time spent with those who are the closest to me.