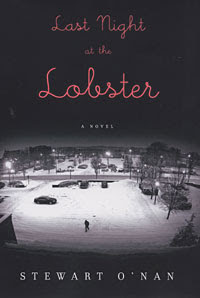 I haven't written about a book for a little while. Last Night at the Lobster, by Stuart O'Nan, was a quick, easy, enjoyable read. In it, Manny, our "hero," who is the manager of a Red Lobster restaurant has learned that his particular branch isn't doing well. Actually, it's doing so badly that it has to close, and he and five employees of his choosing will be offered positions at a nearby Olive Garden. The book takes place on the last afternoon/evening that the restaurant is open, beginning with Manny's arrival shortly before noon and ending with his departure a little after ten o'clock at night.

Not only do we get to meet and know and even like this earnest dweeb of a guy, but we learn a few things about the operation of a restaurant. There's a scene involving a family and their utterly impossible child that is so memorable. Meet Manny, see how he juggles his relationships with his on-the-job girlfriend as well as his pregnant at-home girlfriend; see how he does whatever it takes to make the restaurant function smoothly, even on its last day when a lesser man wouldn't give a damn. Read the book, already. It's a scant 200 pages, large print, generous margins, you can polish it off in an evening when what's on the television isn't worth watching. A surprising B+. 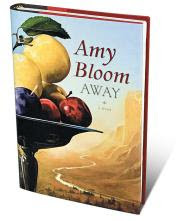 Amy Bloom is a new author to me, though obviously not to all. Her book, Away, is about a young woman who has been through a terrible ordeal and becomes a survivor at all cost. Not the least bit credible, but oh-so-readable!
Lillian arrives in New York City with only the meagerest of possessions, rents half a bed in her cousin's apartment, and sets out to make a new life for herself. Not unlike Manny above, "whatever it takes" is Lillian's motto, and -- quite frankly -- sometimes it takes a lot. Watch Lillian jockey to get a job that rightfully should have gone to her friend. Marvel as Lillian becomes mistress to her boss -- and his father, at the same time! Follow Lillian as she makes her way across the country, heading to Alaska where she hopes to somehow get back to Russia where, she has learned, her little daughter whom she'd believed killed is actually alive. I don't do books on tape (my commute is 7 minutes, 8 when the traffic is bad), but if I did, this would be an ideal choice. A solid B, perhaps even a B+.
Email Post
Labels: Books

Juliann in WA said…
Okay - more books to take a look at, I can handle this - just sleep less, stop preparing and eating food, just sit and read. I did read Kite Runner over the weekend - pretty fast for me, usually a fairly slow reader. Now I have Whistling Season on the side table. I just love books - thanks for bringing these to my attention.
Tuesday, December 04, 2007 11:14:00 PM

Nicole said…
Thanks for the book recommendations! I am in the middle of the new Ken Follet book and am having trouble putting it down.
Friday, December 07, 2007 7:10:00 PM