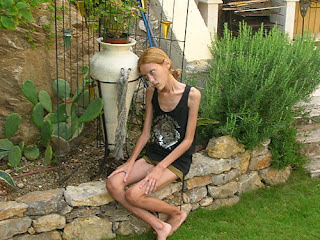 Even though it isn't her real name, let's call her Penny. And the picture to the left isn't a picture of her either. Unfortunately, that is a photograph of a professional model.

Yesterday I visited a place I'd heard of but never been to before. It is the Renfrew Center, near Philadelphia, a treatment center for people with eating disorders.

A young friend of mine has been an inpatient there since just before Thanksgiving. I went after church as a Eucharistic Minister, to bring bread and wine to Penny.

Bulimia and anorexia are incomprehensible to me. My own issues with weight are far to the opposite end of the spectrum. I'd been worriedly watching Penny as she became thinner and thinner, and then for a while she was looking better, healthier, and I stopped being concerned about her. Then all at once the process reversed and Penny began looking gaunt. When something went wrong with the family's furnace, Penny's mom phoned to see if she could come stay with me after school that day instead of going home -- Penny simply didn't have enough natural insulation to protect her in the unheated house.

When I saw Penny yesterday, she was talkative and open about her illness. She showed insight into what was happening to her. She spoke of being goal-and-accomplishment oriented and how this had played into her weight loss; she is learning how to handle this facet of her personality in a healthy way. She's progressing well enough to have earned passes to spend some hours at home each weekend. If she was being honest with me (and I realize that this is a very big if), with the proper support after her discharge in a couple of weeks, she's going to be fine. Penny is a lovely young girl, and yesterday I could see her natural beauty returning to her face, which had looked so gaunt the last time I had seen her.

Being at the Center was an eye-opener for me. Everywhere were young girls, incomprehensibly thin, with sunken eyes and many with angry expressions. It was apparent that some of them did not want to be in treatment, that they were there against their will. Most of them had long, dull-looking hair, and were walking around wrapped in a blanket to keep warm. Worried-looking (oh, what is a stronger word than "worried" -- for it just doesn't do the job here), heartsick moms and dads were there, too, since it was visiting hour.

I was there to bring Food: Bread and Wine, Body and Blood. Spiritual Food that Penny asked for, Food that she knows she needs as much as she does the meals that are served in the cafeteria. She asked me to come back next Sunday, and indicated that another young woman might want to join us, asking if that would be okay. Of course it is. There is plenty for all.

Take and eat, Penny. Jesus said, "This is my body, given for you." And for every one of those young girls.
Email Post
Labels: Thinking

Juliann in WA said…
This is both heartbreaking and uplifting at the same time. What a blessing for both of you - and for us since you have shared this story.
Monday, December 10, 2007 9:50:00 AM

The Calico Cat said…
It is a form of control... While they may not be able to control their environment (school, parents, weather, what is happening in Sudan, etc.) they can control what does or does not go into their bodies... Usually they delve into that at treatment centers as well.

Unfortunately there are websites that support the "Bulemic/Anorexic" lifestyle...

But if you delve deep enough you can find ANYTHING on the internet.

LoieJ said…
Yes, hard to understand. I guess that is because it isn't rational. Something else takes over. My niece started on that path, but her parents caught it really early and she got help.

We do business with a woman from out of state once/year who has grown children. We really did wonder about her when she was here last time, but we are too far away and not personally close enough to really say anything.

Do you know if a person is really thin and talks about it a lot, is that a sign of an eating disorder? As in Thou Protests too Much? My cousin is like that. And when she had serious surgery for an unrelated condition, she dropped to 104 pounds. But I don't think the doctors addressed the weight issue.
Monday, December 10, 2007 1:27:00 PM

Bonnie K. Hunter said…
Oh wow....this is just heartbreaking that these girls feel the need to be in control of their bodies this way. How wonderful for you to go as a eucharistic minister for Penny.My heart goes out to her family!

Susan said…
Sad, sad conditions that convince these girls to take this route. Very hard to overcome, too. I'm glad you could go and be supportive, bringing some spiritual presence into her life while she's there.
Monday, December 10, 2007 11:45:00 PM

Three Birds Inspired said…
Thanks be to God that Penny is cognizant of her need for spritual food in addition to physical nourishment. How wonderful it is that you have the opportunity to minister to her.
Tuesday, December 11, 2007 6:21:00 AM

atet said…
Like you -- I can't understand the need for this. Like you -- my issues of weight tend to the other side. But like you, stories like Penny's break the heart and still find room for a glimpse of hope. Thanks for sharing.
Tuesday, December 11, 2007 11:46:00 PM

Mrs. Goodneedle said…
I'm with Suzan, thank God that Penny recognizes what she needs spiritually as well as physically! Thank YOU for being the face of God to all those who can see Him in this place at this time in their lives.
Wednesday, December 12, 2007 8:00:00 AM

Tanya said…
Unfortunately, I have known a girl much like Penny and it was so heartbreaking. I remember how it started so innocently then how it grew so fast that it seemed unbelievable that this was the same girl. It has been going on for over 20 years with bouts in the hospital, family blaming themselves etc. Happily, now that girl is over thirty she has just gotten married and seems confident in the future.
Wednesday, December 12, 2007 6:22:00 PM