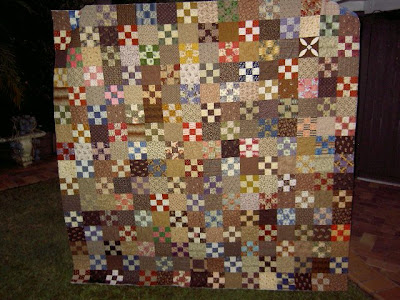 Well, I'd thought I wasn't going to get involved with another swap for a while. I've got a few (!) sets of blocks in the cupboard waiting to be set. And I was determined to get them set before I got into any more swaps. I was sincere. And earnest. And feeling uncharacteristically virtuous. Then I was on some blog or another and followed a link of some sort and ended up here.

And, as Jan would intone, I folded like a cheap tent.

Isn't this quilt terrific? So simple, and so gosh darned gorgeous. And it happens that the blogmistress is running a swap so that people can make their own, and have a marvelous variety of blocks. Oh, yes, yes, yes, pull those tent poles and pegs right out.

But here's the catch: Her swap is only for people in Australia! (Slow down, reader, you are anticipating me too fast!)

What's a body to do? I posted a link to the little swap list I run and within just a few days, I've had a very nice response. People want to make this quilt.

Do you? If so, leave a comment, being sure to leave a way for me to contact you back, and I'll sign you up for my swap list. We'll be swapping both the nine-patches and the unpieced squares, and the due date will be mid August. Civil War repros only. 120 pieced blocks (think leader-ender, girlfriend) and 120 squares. The quilt, if my math is correct (and you'll prolly want to check, knowing me as you do) is made up of 128 of each species, leaving you only 8 of each to create in September when you get everything back!

We'd love to have you join our swap. It's called, A Quilt for Melanie Wilkes. I'd have named it for Scarlett, but just knew she'd say, "Oh, fiddle-dee-dee!" She'd want to think about it tomorrow. And I want to get started tomorrow!

Important Update: Sign-Ups for this close on May 15!

Nicole said…
Isn't amazing how lovely simple blocks are when they are put together in a quilt. That is super! No new projects for me right now, but it is tempting.
Monday, May 11, 2009 10:30:00 AM

Anonymous said…
I wasn't convinced until I read the name. And since GTWT is simply my favorite, I think I might have to jump on it, even though, "It just ain't fittin'". So let me know the details, and if I think I can manage it with the other swaps I have going, I'd love to join. You know where to find me.
Monday, May 11, 2009 10:44:00 AM

Terrific quilt! I'd love to participate.

lcrr_khs said…
Melanie has good taste. My tent folded the minute I nsaw the quilt's name. Count me in.

Sandra Clarke said…
Hi, I have never done a swap and will have to purchase some civil war fabrics- can you give me the details? Thanks, Sandra
Wednesday, May 13, 2009 1:45:00 AM