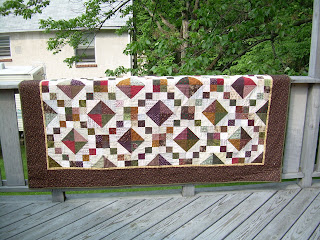 I finished the binding on two quilts this weekend. First is Jewel Box Number Two, pieced last summer. I love Jewel Box quilts and probably will make more than these two. This one is mostly from Civil War reproduction fabrics, though here and there is the occasional contemporary bit. It's the size that goes over the back of the couch, the kind that you pull down over you when you lie down for a bit of a nap.

This is the first quilt I've sold. It is the one that the administrative team at school is buying for a gift for an administrator who is leaving the school after a long tenure. I didn't have another recipient in mind for JB2, and when I think about this woman who will be receiving it, I believe it to be fortuitous that I had the top pieced and ready to finish, because if I were asked to make one especially for her, I think that it would have turned out something like this.

The picture was taken with the ties still long. Trust me when I tell you they have since been trimmed. 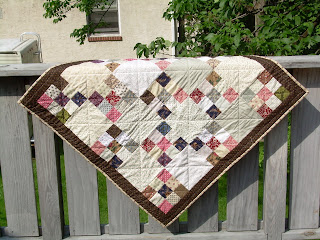 Emboldened by having sold JB2, I approached the chair of the English Department about another employee who is leaving. This young woman came to us this year when we needed someone to cover just two sections of English in the Upper School. Quickly she became a valued employee, someone we hoped would stay around for a long time.

As it happened, her second baby is coming late this summer, and she knows this one is a little girl. I asked the English Chair if the department was going to give her a gift for the baby and she said yes, but they hadn't gotten around to it yet. I mentioned that I had a little old-fashioned baby quilt top that had some pink in it and would be good for a little girl. I hand quilted it last week and then bound it this weekend. I seldom use a light fabric for binding, but in this case, it really seemed like the right thing to do. This quilt is made entirely from CW repros. I loved making it.

Unknown said…
Both lovely and the light binding sets off the baby quilt a treat - I think it's the contrast as much as anything
Monday, June 01, 2009 2:41:00 AM

*karendianne. said…
Nancy, I love the fabrics in you Jewel Box. I also really like the way you used the lighter fabric for your binding on the "baby" quilt. Very nicely done.
Monday, June 01, 2009 10:03:00 AM

Barb said…
Such pretty quilts...thank you for sharing the pictures with us! Wonderful and kind of you to let others enjoy your talents!
Monday, June 01, 2009 4:13:00 PM