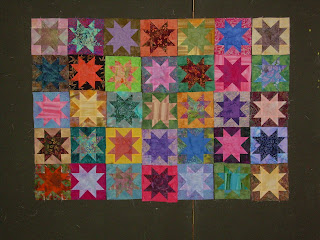 The Alps quilt is a flimsy!  I spent a fair amount of today waiting for Hurricane Irene to come, finishing the last few blocks, and sewing them all together.  We've got rain and some breeze, but -- so far -- nothing like what had been predicted.

I thought I'd share a picture of this leader-ender project that has been in the works for ages and ages. When I don't have another leader-ender, I pull this one out to use.  Unlike most of the others, it has never demanded to be a primary project.

This picture shows half of the blocks that are made and there are the same number in a pile and the makings for twenty-eight more.  I'm thinking when it is all done of just putting the blocks together like this and not adding any kind of sashing.

The rain is getting a little heavier and the wind is supposed to pick up later on tonight.  We have a lot of large trees, so I'm going to take my car up to the high school parking lot where it won't be in any danger of having a tree fall on it.

I'll likely get back to these stars -- and perhaps a new project! -- tomorrow.  Thinking William Morris.  Which is what I'm often thinking.  As you know.

Janet O. said…
"The earth says hello
You twinkle above us,
We twinkle below."
Oops, sorry, I just got carried away.
Love these stars and I think it will look really good without sashing. Just lots of bright twinkling!
Saturday, August 27, 2011 8:43:00 PM

Diane said…
hope the weather is still behaving for you! your stars are great and I think I'd just sew them all together like that too!
Saturday, August 27, 2011 9:08:00 PM

pcflamingo said…
So bright and pretty! Love a quilt with lots of contrast. Glad your weather is not exciting. Dull is good.
Saturday, August 27, 2011 10:15:00 PM

Anonymous said…
The quilt will look fantastic just as you have it laid out. There's such a nice contrast between background blocks. Good luck with the storm!
Saturday, August 27, 2011 11:29:00 PM

Unknown said…
I'm usually a big sashings and cornerstones fan but these look delicious without - always love sawtooth stars. Stay safe in the ghastly weather out there - wise move on the car front
Sunday, August 28, 2011 4:43:00 AM

Three Birds Inspired said…
I really like the mix of color in the batik star quilt. Curious - when you are starting a leader/ender project, do you already have those pieces cut with a particular quilt in mind? Be aware, I am going to glean as much knowledge from everyone I can when we are on retreat!
Sunday, August 28, 2011 7:10:00 AM