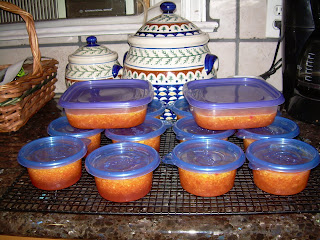 On Thursday afternoon, we drove down to Cape May to have dinner and then return.  A lot of driving for a short spell.  But a delicious meal.  A silly thing to do.  Perhaps even sillier, we stopped at a farm stand and brought home an enormous box of peaches.  I had this hankering to make peach jam.

Friday evening we had company for dinner, so that afternoon I was busy getting ready for that.  By Saturday morning, the peaches were at a do-or-die stage.  I started out by making the cobbler featured in yesterday's post.  That took care of a dozen or so of them. Then I went out to the grocery store to buy Sure-Jell and sugar while Joe retrieved the water bath canner.

Except he didn't.  He looked for a long, long time, here, there, and everywhere, and it was not to be found.  Meanwhile, the peaches were getting riper and riper.  So I looked at the recipes in the pectin box and decided to make freezer jam.  Got out my jars and washed them and looked at the recipe again and it said to use plastic containers.  So out to the store again I went. 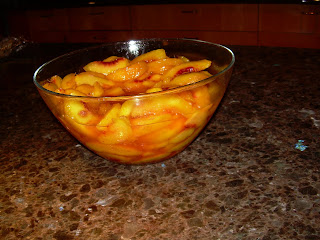 Plunged into scalding, peeling, slicing, and pulverizing, and after a long time (some of those skins just wouldn't  come off) I had two batches finished.  About sixteen cups.

And still had beaucoups peaches remaining.  Peaches that looked even less perky than they had in the morning.  So I continued to scald, peel, and slice, and mixed them in big bowls with a little sugar and lemon juice.  Near the end, Joe came in from his day of installing a new threshold and getting acquainted with a new storm door, and took pity on me.  He began to peel and I continued to slice and mix and at last we were finished.  The neighbors received a bowl full and there's another bowl ready for Carol, later today.

Guess what we had for breakfast this morning!  Golly, were they good.

Three Birds Inspired said…
The peaches look yummy but what really caught my eye are the Polish pottery canisters!
Sunday, August 14, 2011 9:05:00 AM

Mrs. Goodneedle said…
I have a visual image of the neighbors lined up at your front door, bowls in hand... "next"!

Put the hot jam into the jars and then after the boiled lids and rings are on, turn the jars upside down for 5 minutes. Then turn them right side up and they will seal. I love this method... I don't have to get the canner out of the basement.

I do this all the time and have only had one jar not seal. So it went in the fridge and was eaten right away.

Unknown said…
I can totally relate as one who lives in Jersey "near Philadelphia" we also love short hops to Cape May and loads of Jersey peaches and Polish pottery for that matter. Glad all your peaches foud a home.
Sunday, August 14, 2011 12:30:00 PM

howdidIgethere said…
Yum! Funny about the plastic containers, though. My sister makes lots of freezer jam in regular glass jelly jars. I'm always happy to take some off her hands!
Monday, August 15, 2011 4:16:00 PM

Anonymous said…
Sounds wonderful....and you know next year you will be looking for a bushel of "real" peaches because you will only remember how wonderful the peach jam tasted in Oct., Nov. Jan and March...