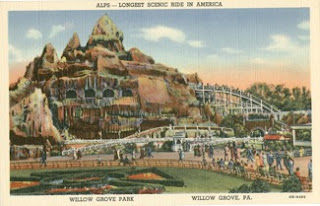 When I was growing up Near Philadelphia, there was a large (for the times) amusement park not very far away.  I remember riding past it, looking out the window from the back seat while my father drove.  It looked like an enchanting place.  I don't specifically remember going there with my family, but I must have.  I went plenty of times as a teenager and young adult.  My parents told me that at one time John Phillip Sousa and his band played there.

One of the rides was a roller coaster, the old-fashioned painted-white-wooden kind, and it featured an enormous mountain structure.  As a child I couldn't imagine having the courage to go on such a thing, but I was fascinated by it.  Because of the mountain structure and the up and down hills, the ride was called The Alps.  Eventually fascination won out over cowardice, and I rode The Alps.  Several times. 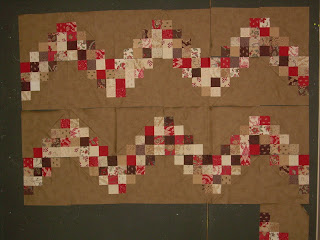 When I first saw the pattern, Roller Coaster, on Katy's blog just before it was published in Fat Quarterly, I thought it was a nifty quilt.  I didn't think much about the name of it; I just knew I wanted to make it.  Most likely several times.  I liked it that much.  I bought the issue as soon as it was available and as soon as some other odds and ends were cleared up, I started working on it.  The blocks are two-thirds made at this point and I still like it enormously.

It has to be called The Alps.

If you're still with me, here's something sort of related:  There's a wonderful semi-autobiographical novel by James Michener called The Fires of Spring.  It is totally different from his other tomes.  I read it for the first time when I was newly married and had moved Far From Philadelphia.  I loved it and was thrilled to identify landmarks near Philadelphia in its pages, especially the amusement park which had to be the same one that housed The Alps.  I've reread the book several times and have suggested it to friends.  And now I commend it to you.

Louise said…
I love the red & tan color combination in your blocks! They look very vintage.
We lived in So.Calif. when I was a kid & I went on the Matterhorn ride at Disneyland. That was a fun ride with lots of "Alpine" atmosphere. I think it's quite tame by today's Rollercoaster standards!
Tuesday, August 23, 2011 9:46:00 PM

OT Quilter said…
Love the blocks!
I have home movies of a family picnic at Willow Grove Park. My mother and my aunts are all wearing dresses and pearls! A different time. I'll look for the Michener book. Thanks for the tip.
Tuesday, August 23, 2011 11:25:00 PM

Pat said…
What a goofy coincidence! A very good friend just posted a video of visits to Willow Grove Park on FB, and I reposted it for another friend who collect postcards from that park. It was quite the place in its day.

Your quilt is going to be wonderful. Your colors are subdued, yet they work beautifully with that pattern to define that rolling motion. Nice job!
Wednesday, August 24, 2011 6:38:00 AM

antique quilter said…
there used to be an amusement park Palisades Amusement park in northern NJ I went quite a few times as a child.
Yes I remember sitting listening to all kinds of music there
ah hadn't thought about that place in years and yes it had a big wooden roller coaster!
kathie
Wednesday, August 24, 2011 8:01:00 AM

Quiltdivajulie said…
What a wonderful post ... I didn't ride a roller coaster until I was a newly wed (the Blue Streak at Cedar Point, OH). My glasses flew off and I turned into a basket case. Now I'm the "bag lady" who stands below and holds all the stuff for those who do ride.

Anonymous said…
It was Willow Grove Park. Before my time Sousa did perform there; 9th grade graduation several of us went & a close friend fell out - lots of the structure was wood & to this day she has the scars on her back-fortunate to live. WGP then became a huge bowling complex where I bowled for many years - now, as with many things it is a shopping mall. Miss the good old days. The Elm Creek Quilt book I won is circulating. I won a Kindle this weekend at a conference & will look for more of the series on Amazon to put on the Kindle. I miss "near Philadelphia" both the family & the place. LOVE THE QUILT. Your CA Cuz
Wednesday, August 24, 2011 10:36:00 PM

Murr Brewster said…
Is this just a different setting from a double Irish chain? Love that pattern. And, my dear, batten down the hatches over there. I hope your next quilt isn't Storm At Sea.
Saturday, August 27, 2011 12:59:00 AM

Mrs. Goodneedle said…
This is a terrific quilt design, and made even better because of the personal connections for you. I have never read The Fires of Spring, looks like I will be now. ;)
Saturday, August 27, 2011 6:35:00 AM