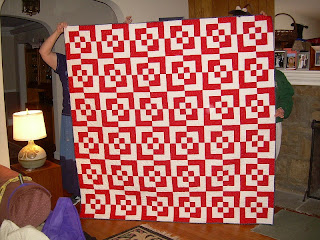 When my friend Blogless Kathy J's son decided to take some time away from college to figure some things out, she knew it was the right decision. When he joined the Army, she was still on board. Then he was accepted into a prestigious unit based in Kansas, a unit where he would be trained as a sniper. This wasn't quite as wonderful to her, and when his unit was sent to spend a year in Afghanistan, Kathy -- a person with a positive spirit and amazingly high energy -- knew she had two possible choices: to spend that year slowly losing her mind from worry or to harness that energy into something constructive.

She began to make a red and white quilt to give her son when he would return home.

Then it dawned on her that all of the guys in his unit were some mothers' sons, and with this realization, she bought a couple of bolts of red and white fabric and commenced a plan of making a quilt for each of the men in the unit, plus their driver. I don't know how many she ultimately produced, nine or ten comes to mind. As the year approached a close (and Sam earned a Purple Heart), Kathy reached out to the Usual Suspects for help and a group spent a Saturday piecing and pressing. Two long-armer friends quilted them, gratis, and a bunch of us volunteered to bind.

I finished binding the one I was assigned on Sunday.

And Sam will be home on Friday.

Thanks be to God.

Lori said…
Very nice, although I don't like the title of your post! (dont take it personal) My niece married a sniper- he's still trying to get over it.
I'm sure the quilts will bring a measure of joy. That is so thoughtful.
Wednesday, March 06, 2013 10:33:00 AM

Janet O. said…
What a story, Nancy! I admire this woman for harnessing her energy to do something positive, not only for her son, but for his entire unit. I love that "The Usual Suspects" (gotta love that name) pitched in to support and make it happen.
Great job!
Wednesday, March 06, 2013 10:34:00 AM

Jean Burke said…
I can't even imagine how she must have felt while he was gone. Thank goodness he's safe.....what a beautiful thing to do for these brave men. Thanks for sharing.
Wednesday, March 06, 2013 10:49:00 AM

howdidIgethere said…
Thanks for highlighting Kathy's efforts! I was happy to have been able to help with the last of the assembly of one of these quilts. I finished binding "mine" last week.

LizA. said…
I'm with Mimi -- goosebumps. I'm sure these quilts will bring a lot of comfort to these brave soldiers as they readjust to "normal" life. What a great way to focus all the stress and worry. I can't wait to get moved and settled so I can quilt up the QOV's I have waiting to be completed.
Wednesday, March 06, 2013 11:20:00 AM

Barbara Anne said…
Applause for Kathy J's idea, for the many helpers who made finishing these quilts possible, and for the snipers who will be home soon! May these soldiers feel the love and have peace of mind and heart in the days and months ahead.

May peace of mind and heart come to all who suffer after serving.

Thanks be to God!

pcflamingo said…
That just gave me CHILLS! What a great thing to do. Every mother of a son (me for instance) thanks you for your generous act.
Thursday, March 07, 2013 1:31:00 AM

Salem Stitcher said…
Wow. Just wow. What a wonderful thing to do!

antique quilter said…
Love the quilt , and oh I just love what she did, this was the best therapy I bet for her and what a treasure each of these "men" will receive , each stitch just full of love.
thanks for sharing the story and I am thrilled to hear he will be home safe soon.
Kathie
Friday, March 08, 2013 5:05:00 AM

Mrs. Goodneedle said…
Thanks be to God is right! Thanks for the service of these courageous and brave men, thanks to The Usual Suspects for the gift of loving and generous spirits.
Friday, March 08, 2013 9:13:00 AM