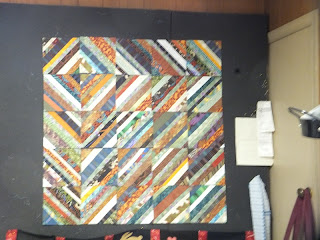 Oh, I've had such fun these past few days! It started when I won two bags of Julie's left-over strings that seemed to be separated already into Sweet and Sophisticated. I opened the Sophisticated bag and added from my Australian, my batiks, my miscellaneous, and a few Kaffe/Kaffeish scraps. Not being as liberated as some stringers, I made all of my strings the same width from end-to-end.  I cut twenty-five muslin squares.

Then the fun began! I decided to use one Kaffe fabric for the initial center strip on each blocks. And then the layering/building began. I chain pieced, reaching into the bin of strings somewhat randomly (Funny, Mrs. Goodneedle wrote just today about having some trouble with random!) and built and layered. Then the blocks were trimmed to 8-1/2 inches and put up on the design wall.

I think this may be the final arrangement. Next they'll be sewn together to make a quilt for a Sophisticated Baby. I just happen to need two baby quilts completed by the end of October. How convenient that I have the bag of Sweet Strings to plunge into!

Oh, yes, down at the bottom of the photo you can see part of the project I should be working on!

Helen said…
This is beautiful...I love the layout!

Years ago, a group of ladies got together where I worked and we each made a log cabin with shared fabrics. The goal was to reach in a bag and use whatever you pulled out. Not easy, but it sure was fun and that was my only truly random quilt!
Wednesday, September 04, 2013 6:18:00 PM

Janet O. said…
What sophisticated baby wouldn't love such a quilt? Nice job.
Why do there have to be "should" projects in the way when inspiration strikes? And why are someone else's scraps always more fun?
Wednesday, September 04, 2013 6:46:00 PM

Pat said…
This is great!! A new technique, an adventure in randomness, and a great top.

pcflamingo said…
My dad was a CPA and I find that I must fight against the tyranny of symmetry. I like things to be too matchy-matchy. SOmething to do with how my brain works because of my heritage. That's my story and I'm sticking to it.
Wednesday, September 04, 2013 6:58:00 PM

Dogwood Lane Rambles said…
Love the blocks and the quilt. How do you plan on backing it? With the muslin I'm thinking it might be kind of heavy with batting and all. What do you think? I love strings but have never done one time to take the plunge I believe.
Thursday, September 05, 2013 11:08:00 AM

Patti said…
Congratulations on having discovered the fun of strings. They are truly addicting! Next you'll be finding yourself stripping the "uglies" in your stash - pieces you wonder why you ever bought.
Thursday, September 05, 2013 12:29:00 PM

Barbara Anne said…
This is a jazzy, delightful quilt and I like the block setting you chose! It was fun to enlarge the photo and to look for that Kaffe fabric that every block has in common. Will you add a border or borders?

Your project that is quietly waiting for you will wait pleasantly for as long as needed.

I am about to embark on quilted Christmas gifts and have a written plan for each one. The aunts who received their tardy, tardy 2012 Christmas gifts just two weeks ago were kind to say getting Christmas gifts in August is fun, but I don't want to do that again.

Random - if you truly pulled from the brown paper bag and stitched without thinking about adjacent strings, you are much stronger than I am. I've never been happy or content with that degree of randomness.

Tanya said…
Your string quilt is wonderful! I find my string bin overflowing so either I'm going to have to make a string quilt or find someone who wants a bin of stings.
Friday, September 06, 2013 6:55:00 PM

Nann said…
Trust me, Nancy -- once you start making string blocks you'll find stringspiration all over the place! Then you find that you're cutting up yardage just to create more strips.....a slippery slope, but it's fun to slide down it.
Saturday, September 07, 2013 7:17:00 PM