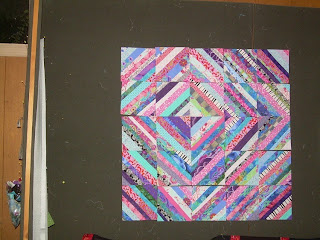 Well, somebody several people pointed out that strings were addictive and oh, dontcha hate it when the multitudes prove to be right?

To the left is the second set of string blocks that I made from the second bag of Julie's string left-overs. I'd taken the first bag and added to them and made my first string project earlier this week. The strings were not from my palate at all, and I called the project Sophisticated Strings. And I loved the results. The blocks are all put together now and waiting to be finished later this month. This second one is more my usual color range, and I think of it as Sweet Strings. Both projects will be either tied or machine quilted and given to my Circle's current charity project, a grass roots agency to help under-resourced new mothers and their babies. 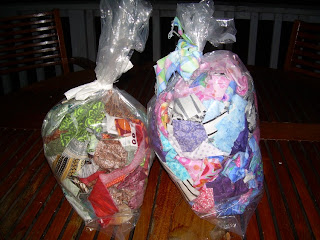 And here's what's left from my plunge into the world of string quilts: Two bags, both containing some of Julie's and some of mine, one batch "sweet" and the other "sophisticated." Friends, I really need them outta here so I can return to my regularly scheduled programming. So my thought is to pass them along to one of you who has been thinking of joining the string phenomenon (here Near Philadelphia we would be inclined to say the "string band," but that's kind of an inside sort of thing). Would you like these strings for your very own? Would you maybe think about adding to them and then passing them along yet again?  Leave me a comment and tell me whether you've strung before or whether your a newbie. This has to happen fast -- a post office run for other purposes is scheduled for Monday afternoon. So leave your comment, and on Sunday night I'll draw a name in the hope of getting the address in time for that there post office run.

Janet O. said…
Oh, Nancy, I hope someone snatches these up, and it had better not be me! I am already far too easily distracted--and I have a string UFO in my cupboard already! But I do think your sweet string quilt is just that. What a wonderful purpose it will serve!
Saturday, September 07, 2013 8:34:00 PM

Mary said…
I think string quilts are loads of fun to make and give even though I haven't made one for quite a while. Before I retired from teaching Family and Consumer Sciences, I would show my kids who either hadn't gotten their project yet or were finished before everyone else how to do string blocks. We then combined all the blocks to make a quilt to raffle for the local shelter for abused women. I would love to use your strings for our guild's project of donating small quilts to the firemen and sheriff to hand out when kids are in bad situations.
Saturday, September 07, 2013 8:44:00 PM

Mary said…
I forgot to tell you, those kids who made string blocks were lovingly called the Strip Club!
Saturday, September 07, 2013 8:45:00 PM

Carol said…
Your strings are marvelous! What fun to mix in others strings with your own strings. There are always fabrics that are new to me. I have done one string top several years ago and it was great chaotic fun! Would like to do another adding some new treasures!
Saturday, September 07, 2013 11:48:00 PM

Laura said…
Strings are definitely on my quilting bucket list (is it weird I have a quilting bucket list?). I'd love to try one! I'm living apart from most of my stash right now (moved cross country for a new job and things are in storage for a while), so a string project would be perfect for me right now.
Sunday, September 08, 2013 12:56:00 AM

quiltmom anna said…
I have not done a string quilt- I have often thought about doing one but have somehow not got around to it.
I am sure that they are fun to make.
Looks like you had a fabulous holiday.
Hope all is well.
warmest regards,
Anna
quiltmom1(at)shaw(dot)ca
Sunday, September 08, 2013 2:41:00 PM

Sarah said…
I haven't strung before, but have been keeping my strings to do one "one day". Your pinky purple top looks gorgeous. I love how this hobby allows us to pass on our scraps (read left overs, rubbish, trash!) to others who are so grateful for them!
Sunday, September 22, 2013 3:37:00 AM