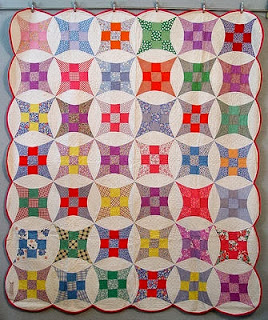 My friend Karen Dianne has sung the praises of a product called Inklingo; she has posted some seriously beautiful quilts that she has made using this system. Her Alabama Beauty is a magnificent quilt.

The Improved Nine Patch block is so gorgeous that I can't stand it.

It's been a tough year. Remember, I was told early into it that I was going to lose my job and spent several months grieving that before I found another job. I had some trouble getting going with sewing during that time.

But here we are nearly through October, for crying out loud, and I haven't Inklingoed. Not even once. And deep down I know that November and December are not the months for a new skill.

But I'm thinking, just thinking, that despite some sort of vague vow about not starting anything else new until more of the UFOs and scraps are history, that it might be the thing to do, you know, to just order what I need for that there Improved Nine Patch (doncha just love that name? As if a nine patch could possibly be improved?) and there it would be -- ready, waiting for me, as soon as the normally quiet, reflective month of January comes around.

LizA. said…
I've always loved this block. Even have one started somewhere....I have a love/hate relationship with InkLingo. I love the printed pieces with all the registration marks to make piecing so much easier but my printer, when it works, doesn't love the fabric/freezer paper so much. I also can't do much hand work anymore because it hurts my thumb ....
Tuesday, October 22, 2013 11:14:00 AM

Janet O. said…
Oh, I love the rationale and the reference to a vague vow, which probably didn't feel vague at all when you made it! LOL
Improved 9-patch is one of those great traditional designs that always speaks to me. It is on my bucket list, but that is as far as it has gone. I would love to watch you make one! : )
Tuesday, October 22, 2013 11:41:00 AM

Quiltdivajulie said…
Listen to your heart - making quilts and sewing are supposed to be FUN, not obligatory or controlled by rules (written, spoken, or vaguely alluded to). If you want to try Inklingo now, then do it. Do it now. And have FUN while you're testing it out.
Tuesday, October 22, 2013 11:42:00 AM

Barbara Anne said…
I'll visit that link in a moment as this term "InkLingo" is new to me. The quilt you've shown is lovely!

In my experience, starting a new quilting project with an intriguing pattern, a delightful fabric, a new technique, or a new product is better than therapy for improving my mood and outlook. Yep, I say go for it no matter what scraps and UFOs are lingering in the wings. They'll quietly wait for your attention in January or thereafter.

Karendianne said…
Well this is music to my ears! I sure hope you go for it. I haven't been able to hand-piece w/ the wrist but transitioned with pretty much all Inklingo projects to the machine.

Paula, the quilter said…
You don't have to make a full sized quilt either. I've seen a lovely table runner made with this block. Just so you don't feel like you need to invest a lot into it.
Tuesday, October 22, 2013 4:31:00 PM