The Week that Was, Near Philadelphia 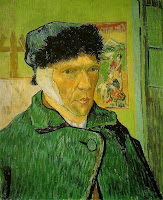 He used to be a redhead. Joe, I mean. Though it looks like Vincent was, too. Most of y'all didn't know him then; he's had nice white hair for a good many years now.

Fair-complected redheads are at increased risk for skin cancers, and Joe's been visiting a dermatologist regularly. She's identified lots of little basal cells and snipped them away. I tease him, saying she's trying to take him away from me in bits and pieces.

Recently she took off what looked like another basal cell type on the tip of his ear. Turned out to be a different type, turned out also that the margins weren't clear and there was a bit of nerve involvement. Which led to our recently having a consultation with a specialist to learn about a Mohs procedure. We liked the specialist right away, the procedure made sense, and we were very, very pleased when the arrangements were made for the procedure to be done in just a couple of days.

A phone message reminder confirming the appointment led to some confusion. It referred to a different office, about thirty minutes drive away, rather than the nearby office we'd visited initially. Joe phoned to clarify and was told that the message was correct; we were to go to this other office. It took longer to get there than we'd anticipated (stopping for a long time at a railroad crossing), and when we arrived, we were told that we were supposed to be at the original office, not at this one. We were more than a little bit irritated, especially since the doctor had agreed to come in early to fit us in.

So we drove back towards home, feeling stressed, and arriving a half-hour late for the scheduled appointment. Everyone was apologetic. And after that, everything went just fine. We'd been told to allow up to four hours because there was no way to tell in advance how many tissue removals would be needed. Dr. P was his usual easy-going and pleasant self, the nurses were terrific, and the whole thing took a little less than two hours.

A huge bandage dressed the ear until this morning, when we took it off. It isn't very pretty right now, but I can tell already that Dr. P prolly would do very nice applique; his stitches are tiny and perfect. Joe isn't allowed to do anything really strenuous yet, not that he really wants to. He's been a good patient, with a minimum of complaining and no whining at all. I'm feeling thankful for Frederic Mohs who developed this technique and for Dr. P, who carried it out. And also for my dear sister, who came to visit the patient the next morning, bringing --

a nice bouquet of sunflowers.

Janet O. said…
My dermatologist has long reminded me that redhead skin is the most vulnerable to the sun. I'm glad that things went well for Joe.
Fascinating to learn about Mohs Surgery. I've had skin cancer removed, but never by that method. Nice to know what is available.
What, no photo of the flowers? : )

Karendianne said…
Another well written story! Glad it had such a good ending...the sunflowers cracked me up.

Barbara Anne said…
I'm glad the annoyance of misinformation didn't cause the procedure to have to be rescheduled. Happy healing to Joe and cheers that he's mindful of watching for and being checked for those little skin cancers.

Ray said…
So glad that the procedure went well! I know that you are taking good care of Joe. Please take good care of you too. I know how stressful being the caregiver is - especially when the Big C is involved. Hugs to you both.
Sunday, October 06, 2013 4:31:00 PM

AnnieO said…
My sister was a redhead--though she is relying on professional help to remain so now--and said she found her first white hair at age 19! Glad your travels resulted in success and small stitches and sunflowers!
Thursday, October 10, 2013 10:22:00 AM

Lynda Halliger Otvos (Lynda M O) said…
Sunflowers are the Best flowers; I have loved them for years; we even managed to coax a dozen to flowering one summer in Sarasota county Florida-much to the amazement of the woman from Kansas who told me it was impossible to grow them in FL. She was blown away when she went by my home just to scope the blossoming giants !~!

Good that Joe's procedure went well. I hate it when docs have more than one office-stuff like your experience happens WAY too often to my recollection.
Sunday, October 13, 2013 2:50:00 PM